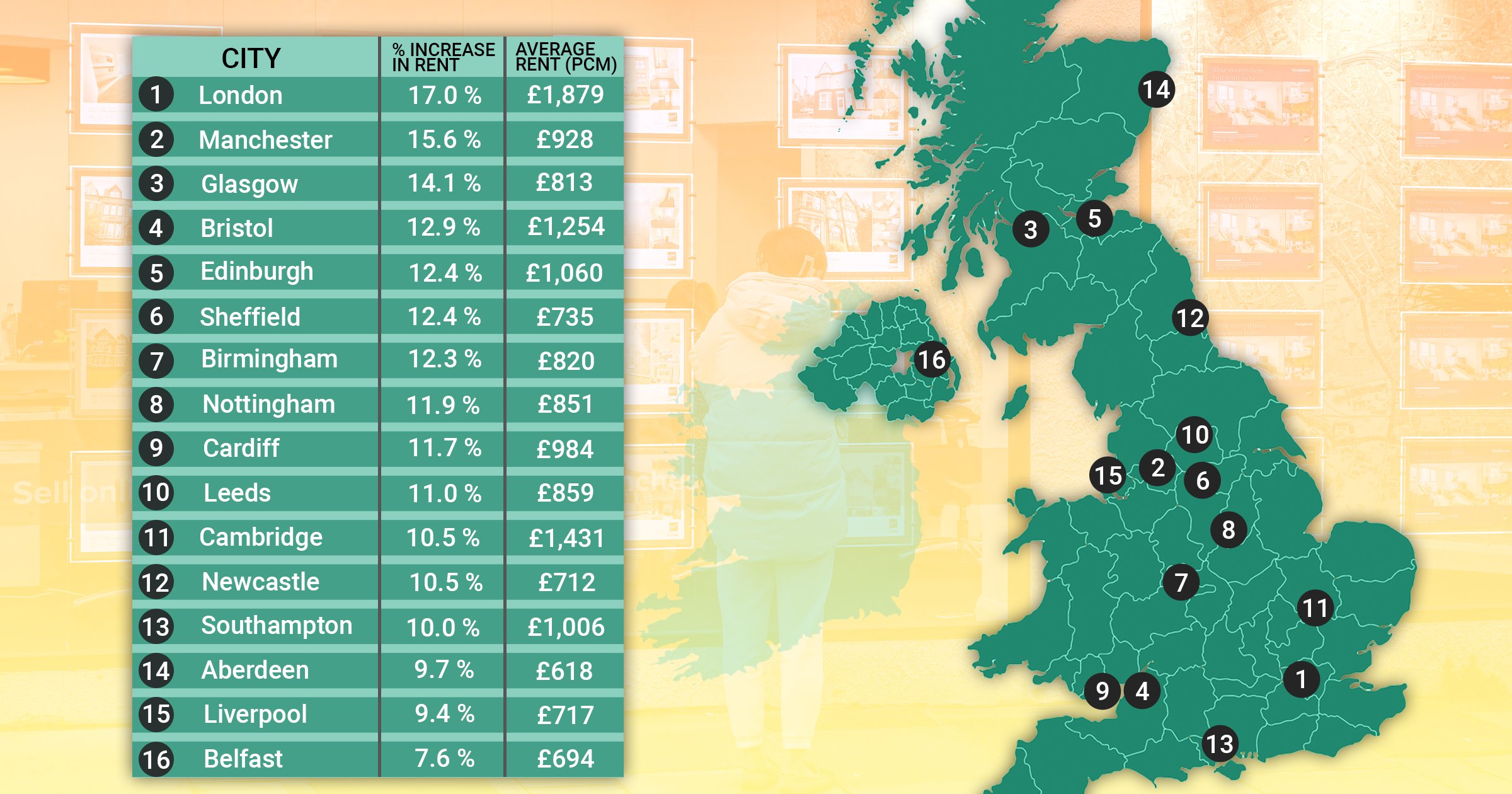 Rent – like everything these days – is on the rise.

According to the property portal website Zoopla, the average rent for a new letting has leapt to £1,078 a month, a £117 increase compared to last year.

This means rental prices have soared at twice the pace of wages in the past year, with no signs of slowing down anytime soon.

Single people already battered by snowballing food and fuel bills will hand around 35% of their incomes to landlords – the highest in more than a decade.

And this is expected to edge towards 40% by 2023, Zoopla predicted in its end-of-year market report released today.

People’s rental opportunities in these cities are few and far between as well given that demand far outstrips supply.

Many cities have seen rents climb by double digits. The rental pain was pronounced in Manchester, seeing a 15.6% leap to £928.

One of the smallest rent increases – but an increase nevertheless – was in Northern Ireland’s capital city, Belfast. Rent rose by 7.6% to £694.

Slower rental growth of less than 8% was seen in smaller cities like Hull, York, Oxford and Leicester – yet that’s still higher than the average 6% rise in earnings last year.

Though the some 13 million renting from a private landlord were granted some relief by the housing market being rattled by the government’s October mini-budget.

This led to a modest increase in rental supply in recent weeks, with the number of rentable homes shown on real estate shopfronts going up from seven in September to 10.

Hard-hit renters are doing their best to adapt to rental unaffordability, such as eyeing up one and two-bed flats and houseshares, Richard Donnell, executive director at Zoopla, said.

That is, if they can even afford to move out at all. Donnell said Zoopla has seen people move back home with relatives to stay afloat.

‘A chronic lack of supply is behind the rapid growth in rents which are increasingly unaffordable for the nation’s renters, especially single-person households and those on low incomes,’ he said.

‘Many are also staying put to avoid the worst of rent increases.’

Private renters already have a lengthy list of woes compared to homeowners. They’re twice as likely to suffer from anxiety due to, among other things, financial insecurity, a report by the Joseph Rowntree Foundation found.

Rental rights groups reacted with a lack of surprise at the news that rent is burning an ever-increasing hole in people’s pockets.

Al Mcclenahan, training lead for helping Justice for Tenants, said rent is just another factor deepening the cost-of-living crisis closing like a vice on tenters.

The group’s helpline, he told Metro.co.uk, has seen phone-ins from tenants struggling to afford both rent and food for their families ‘double’.

‘It also creates an environment where tenants are too scared to report damp, mould and other issues in the property because they fear their landlord will increase their rent,’ he says.

‘Most tenants don’t have any options, there isn’t enough social housing to be an alternative, and if they move further away from a city centre, they have to spend more money on transport and can work fewer hours if they have to pick their kids up from school, so they are trapped between a rock and a hard place.’

Alicia Kennedy, director of the campaign group Generation Rents, said renters are ‘paying the price’ for the lack of new homes being built.

And their current options aren’t great. Around 13% of the estimated 619,000 privately rented homes and flats in England fail safety standards, Generation Rent says.

‘Even renters who are happy where they’re living are vulnerable because there is very little stopping landlords from raising the rent to an unaffordable level or kicking them out to get someone in who can pay more,’ Kennedy said.

‘With prices going up throughout the economy, more renters will be pushed into poverty.

‘Long term the answer is more homes and particularly social housing, but right now the government must step in to freeze rents and suspend no-fault evictions.’