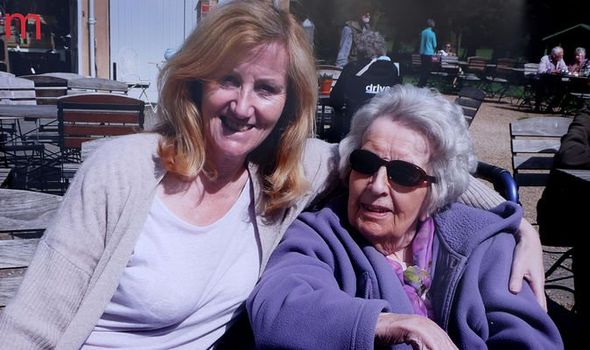 Joan Dancocks died aged 93 just over a month ago but Angela said a Covid-enforced veto imposed by a care home will haunt her for ever. She says she was allowed to see the former charity helper only when it was “deemed she was dying”.

Former A&E consultant Angela, 61, had last seen her mother in February 2020 before the pandemic.

She came back from visiting twin Judith in Australia on March 13, but The Mill House in Worcester was in lockdown.

Only more than a year later was Angela allowed to see Joan, for 30 minutes weekly. She was granted free access just five days before Joan died, on August 5.

Once she was so frustrated by restrictions she had a “meltdown” outside and was reported to police.

She will join West End actress Ruthie Henshall, who endured a similar agony, and hundreds of protestors demanding the adoption of Gloria’s Law, named after the star’s late mother. It would give families unfettered access to loved ones.

They will hand a 300,000-signature petition to No10 aides on Thursday.

If passed, the law would grant the country’s 400,000 care home residents the right to nominate a family visitor for all circumstances.

Angela said: “I was not able to have a garden visit as my mother could not be moved. I tried to argue it was discriminatory to only allow visits to residents who were mobile.

“I became very depressed and anxious… and lost weight. We drove to the home to drop some presents off. I burst into tears and had a meltdown.

“In January the manager sent an email to say all Skype calls had to be pre-booked and could only last 15 minutes. I was horrified when the first call was terminated – both myself and my mother burst into tears.”

Angela says she faced threats of legal action and being reported to the General Medical Council.

Ruthie, 54, is an ambassador for Rights for Residents campaigners. She called the overall access situation a scandal “verging on the criminal”.

In my life I have faced many tough challenges, but none have come close to the past 18 months

She added: “I watched my mother dying from a window. This law is designed to ensure that never again will someone living in a home be forcibly alone again.”

Angela, of Northampton, said most of the care staff were “lovely” but added: “Mine and my mum’s human rights have been trampled over.”

She wrote to officials at the Care Quality Commission, asking: “When is someone going to realise this is a national humanitarian disaster?” but a month later has not had a reply.

The regulator rates The Mill House as “requires improvement”.

Registered provider Joanne Carroll said: “Our priority has always been to keep our vulnerable residents safe.

“We followed government guidance. We do not underestimate how difficult the initial period of the pandemic was for relatives and residents. We relaxed our visiting restrictions as soon as we could safely.”

In my life I have faced many tough challenges, but none have come close to the past 18 months.

My dear 93-year-old mum died on August 5. I was not allowed to see her for 13 months – and then only in 30-minute weekly visits.

Mum was disabled by Lewy body dementia, which left her bed-bound and totally dependent on carers. She had no understanding as to why I was not visiting her.

Our 15-minute Skype sessions were facilitated by 25 carers. It made no sense they were allowed to sit with mum when I could not.

At the end of her life when mum could no longer speak, swallow or recognise me, I sat by her side playing her favourite music, feeling angry that families have been kept apart by draconian guidelines.

It is impossible to comprehend how a caring society can allow this.

Campaigners have fought to ensure every resident gets an essential visitor, but the people responsible still aren’t listening.

Coronavirus: A new way to pay tribute to those who have died with COVID-19