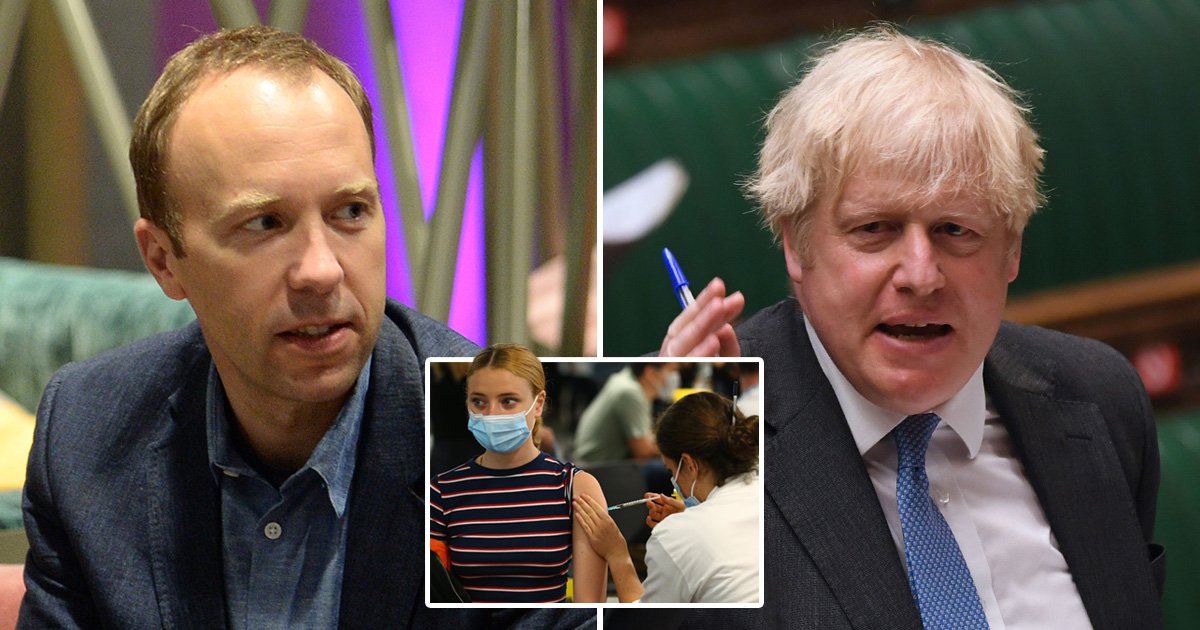 Matt Hancock failed to tell Boris Johnson about a major study that could have spurred the Cabinet to push ahead with reopening the country on June 21, it has been reported.

The Health Secretary is said to have known about data showing how effective vaccines are against the Delta variant (formerly known as the Indian variant) three days before the PM, Chancellor Rishi Sunak and Michael Gove, the cabinet minister.

The four met last Sunday to make a final call on whether to postpone the June 21 ‘Freedom Day’.

Figures familiar with the meeting claim the findings, by Public Health England (PHE), were not raised by Mr Hancock, The Telegraph reports.

They were also said to have been left out of briefing papers handed out ahead of the talks. The results were reportedly emailed to Downing Street aides a few hours earlier.

Public health experts cited uncertainty about the effectiveness of vaccines as a reason for pushing back the end of restrictions to July 19.

Many felt more work needed to be done on whether vaccinating people breaks, or simply weakens, the link between infection and serious illness.

The sudden rise to dominance of the Delta variant complicated the picture – scientists widely believed there was no reason to suspect it was more resistant to vaccines but were alarmed by increasing cases and signs that hospitalisations were on the rise.

Science advisers from Sage presented last Sunday’s meeting with modelling that showed reopening on June 21 would lead to a large swell in hospital admissions.

The PHE study showed both the AstraZeneca and Pfizer jabs were in fact more effective at preventing hospitalisation with the latest strain than they were against previous variants.

It may have prompted ministers to lift restrictions on Monday anyway, although many of the fears expressed by experts were to do with the number of people who had not yet been inoculated rather than the effectiveness of jab.

Steve Baker, the deputy chairman of a faction of anti-lockdown Tory backbench MPs, told The Telegraph: ‘Either Matt Hancock thought this data was insignificant or he thought it should be withheld from the Prime Minister and other key ministers.

‘Either way, the mind boggles at what conversation must now be necessary with the Prime Minister, and I feel confident it will be a matter of interest to my colleagues on the relevant select committees.

‘If Matt Hancock was deliberately withholding relevant information, what was he trying to gain? Was the Prime Minister bounced?’

A government source claimed ‘equivalent data’ drawn up by Sage was shown to Mr Johnson and his colleagues and included similar findings about the effectiveness of vaccines.

The source told the newspaper: ‘When the decision was made to delay, ministers knew that the vaccines work. That is why we are buying more time to get more jabs in arms.’

Some measures suggest vaccines are working better than predicted by the forecasts presented at the meeting, cases are rising at a much slower rate than in previous weeks, while hospital patients appear to be less likely to get seriously ill and die than in earlier waves as they tend to be younger

Ministers are said to be considering bringing the date forward to July 5 if the picture continues to improve.

The PM said on Friday the data ‘certainly’ indicates he would be able to lift the remaining Covid restrictions on July 19.

Angela Merkel: A career in pictures