Schools are obliged to inform authorities if parents cannot provide proof their child has been vaccinated. 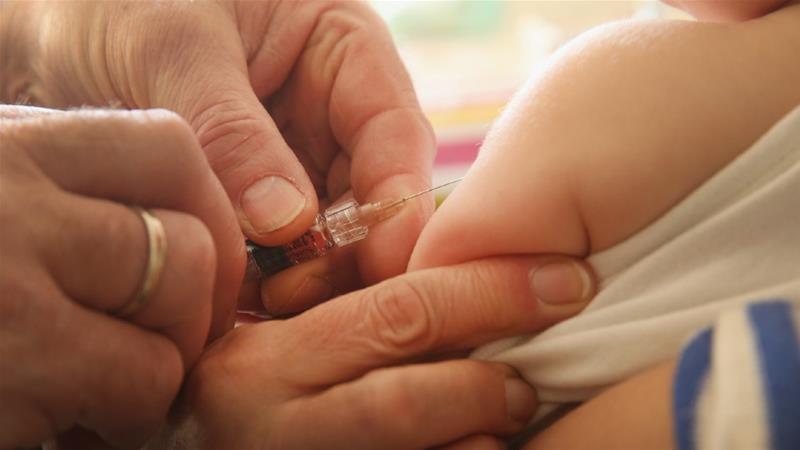 Berlin, Germany – German parents must now prove their children have been inoculated against measles before they can be admitted to schools,under a new law which seeks to boost vaccination rates.

The legislation, which came into effect on Sunday, requires children to have documented proof they have been vaccinated, or schools and nurseries will be obliged to inform local health authorities.

“We tried for many years to get a better rate of vaccination without laws but it hasn’t helped, so this is the last step,” Berlin-based paediatrician Jakob Maske told Al Jazeera. “I don’t know if it will help to make the rates better, but we will see in the next two to three years.”

The number of cases in Germany is not worryingly high at present, but any measles epidemic could lead to deaths, Maske said.

Measles, a highly contagious and potentially deadly disease that poses a high risk to young children, kills more than 140,000 people per year, primarily in developing countries, according to the World Health Organization.

Recent years have seen a resurgence of the disease where it was previously considered eliminated as increasing numbers of parents forgo vaccinating their children, in part due to debunked research linking the jab with autism, which has inspired a worldwide “anti-vax” movement.

Under the new law, parents could face fines up to 2,500 euro ($2,800) if their children are not vaccinated, while older children already in education will have until July 31, 2021 to provide evidence of immunisation through a medical certificate.

The German parliament approved the law in November after months of debate, with support from the conservative Christian Democratic Union, the Social Democratic Party and the liberal Free Democratic Party.

“It is highly contagious and can even have fatal consequences. This infectious disease primarily endangers those who can’t protect themselves: our children.”

At least 95 percent of individuals need to be given two doses of the combined measles, mumps and rubella vaccination to ensure community protection and to prevent outbreaks, according to advice from WHO.

However, a report published last year by the Robert Koch Institute (RKI), Germany’s federal agency for disease prevention, found that just  93 percent of children starting school in the country have received both inoculations.

After a period of sharp decline in the early 2000s, the number of cases in Germany has been growing in recent years, increasing the risk of major outbreaks.

Germany recorded more than 500 cases of measles between January and October last year, according to the RKI, an increase on the same period in 2018.

The new law has been controversial, with opposing politicians, parents and doctors questioning the level of bureaucracy required, or painting it as an example of government overreach into the private lives of German families.

The German Ethics Council, an independent council of experts who assess public policy, objected to the proposed law in June, calling it “not justified”. It recommended less drastic measures to reach the 95 percent goal, and said fines and school exclusions would hit socially disadvantaged families the most.

Several parents have already launched a legal case with Germany’s constitutional court, claiming the new law violates the physical integrity of their children, and their right to raise their children as they choose.

Further legal complaints from parents and campaign groups, some of which represent doctors, are expected.

Sixteen European countries have experienced measles epidemics, according to WHO, which declared the situation a grade two, or moderate, emergency last year.

More than 100,000 cases of measles were reported in Europe between January and October in 2019, a significant jump from 2018, and more than triple the number of cases identified in 2017.

Others are mulling similar measures, such as in Britain, where Health Secretary Matt Hancock said in September that he was “looking very seriously” at compulsory inoculations.