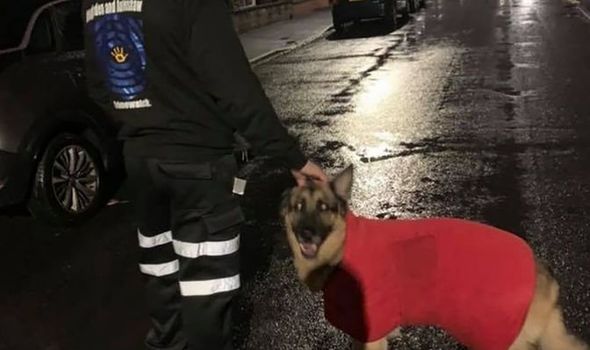 The founder of “Crimewatchers”, who wishes to remain anonymous, admitted he has fallen into “some sticky situations” when patrolling parts of Greater Manchester. He and his team started the work at the beginning of the COVID-19 pandemic, undertook essential training and were applauded by police.

But the man, who patrols with mascot Sabre the dog, told the Manchester Evening News he worries either himself or another member could soon “run out of luck”.

The vigilante, who quit his job as a mechanic to carry out the Crimewatchers role full-time, said: “I don’t want myself or my team to get hurt but more often than not I’m outnumbered, and I fear my luck may soon run out.

“I always try to keep things positive but tonight I need to express something that at present is becoming a major concern.

“As demand has grown over the recent months, we have attended some incidents that have put me in some sticky situations and more recently this is happening too often.

“I have a great team but I am the only full-time Crimewatcher with me going out weeks on end without a night off.

“The lads do a great job supporting me as and when they can but they have full-time jobs and I need lads out with me every night.

“We need safety in numbers to prevent what I feel sadly at the minute is inevitable.”

He said he was worried about the rise in crime last year, particularly in the Droylsden and Audenshaw areas of Tameside.

But the former mechanic said he and his colleagues do not aim to be “vigilantes”.

“When I started this I never had the intention of seeing it as a business opportunity,” he added.

“Crime was on the rise in the area and we just wanted to support people.

“I’ve taken a chance and I’m hoping that people are going to support us with what we have done already.”

Crimewatchers has been accepting donations online and launched a subscription model earlier this year, with residents able to pay from £5 a month to support the group.

The group’s founder says extra funds are now needed to support more members, who could join him on patrol for “safety in numbers”.

Speaking in May, Chief Inspector Lee Broadstock, who deals with neighbourhood policing in Tameside for Greater Manchester Police, said the force was happy to work with Crimewatchers after previously raising concerns about them.

He said: “There was some initial community concerns with a view that it was edging towards vigilantism, so we had to respond.

“But we have since met with them, they have affiliated themselves to establish a security company and go down the route of private security, and we are fully prepared to work with them in partnership.”

Sir Philip Green charged with misdemeanour assault in US