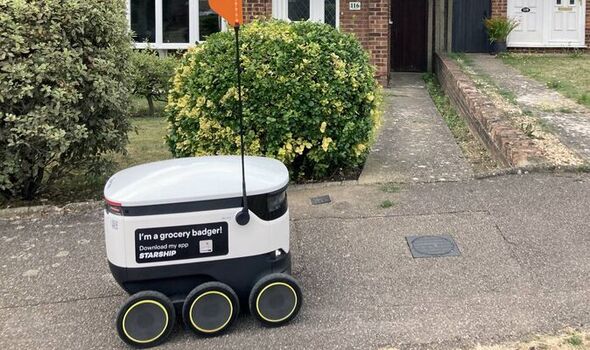 The Starship bot is a miniature white van on six wheels that can whisk your food shop from cold store to front door without getting lost or stuck in traffic, and it’s currently being trialled by the Co-op in Milton Keynes, Cambridge and Bedford.

Since 2018, these robots have made 3.5 million customer journeys in 20 countries following a 2014 launch by Starship Technologies, a company formed by two Skype co-founders.

Now the UK rollout is set to be turbocharged as rival companies from Wilko to DPD gear up for real-life robot wars by launching their own versions.

But can you really rely on something that looks like a mobile slow cooker to deliver? Even one that seems so cute? I’m in Bedford to find out.

Not quite. Orders are placed via a downloadable app but on the morning of our experiment, our customer cancels their participation due to an unexpected outing. Hmm. Robots, one, humans, zero.

Still, Starship’s head of UK operations, Andrew Curtis, is on hand to greet me at the Co-op’s Goldington convenience store where there is no shortage of pavements to trial. 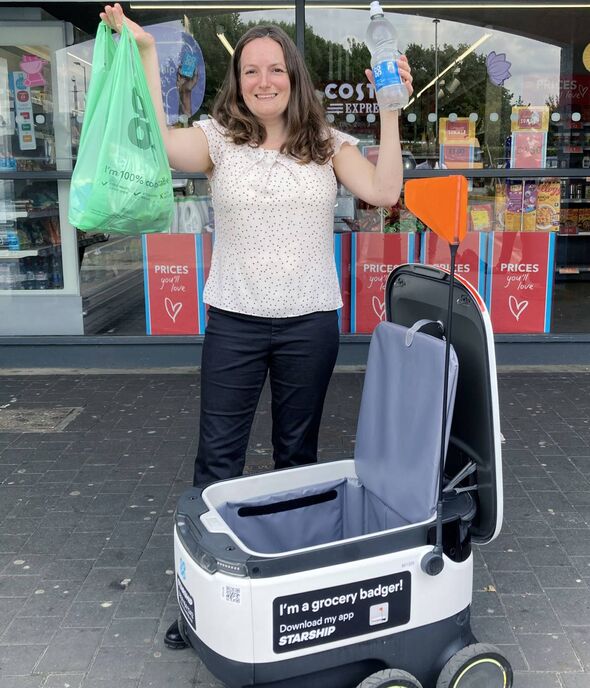 I arrive to find several robots grouped together looking like a mini lorry park. Every so often one jolts awake and performs a few abrupt manoeuvres, like a learner driver, before parallel parking back into place.

“They’ve lost their mojo,” Andrew jokes before explaining they’re mapping their surroundings after lying dormant for too long. “It’s to do with localisation,” he continues. “A lot of people think they run on GPS (Global Positioning System) navigation alone but that’s secondary.

“They collect ‘frames’, which they convert into straight lines and triangulate so they know where they are to the nearest inch.When they’ve ‘slept’ for a while, they need to go for a quick run to localise themselves again.”

Each robot uses internal cameras and sensors to create a “virtual bubble of awareness”. If the bubble is compromised, say by an out-of-control cyclist or a sleeping cat, the robot reacts within a split second. “Most time of the time, it comes to a safe stop and lets the obstacle pass,” Andrew says.

“The robots are 99 per cent autonomous but are monitored by people who can intervene if necessary. That one per cent buffer is for things the robot has never seen before, which we can’t predict, like a fallen tree.”

As Goldington’s store manager Ray Maynard prepares an order for the demonstration, passing shoppers can’t help but have their say. “It is like something from oiwiI outer space,” remarks one lady in her seventies. “It is a wonderful idea. I would use it, especially if I was ill. It’s amazing.”

Like most people, she has lots of questions. How fast does it go? Up to 4mph. How much does it weigh? 80lb. How far does it travel? Up to two miles. How much shopping can it hold? Three bags if packed right, apparently.

Great-grandmother Diane, 69, pulls a face. “They are creepy” she whispers, conspiratorially. I ask her why. “I’m not sure,” she says. “I think it is because they are out there on their own.”

Hollywood has taught us to distrust robots, particularly humanised ones. They either plot to kill us – like The Terminator – or malfunction spectacularly – like Ash in Alien.

But a Starship robot resembles the title hero from Pixar/Disney’s WALL-E film. It’s just a box on six wheels.

Couldn’t Diane be convinced to use one?

“No,” she says with a mortified look. “I have a husband who does the shopping for me.”

But Starship and the Co-op insist she’s in the minority, as confirmed by Ray returning with our milk and bread.

“The interaction with customers has been amazing,” he says. “Children follow them around the store and help us load them up.” 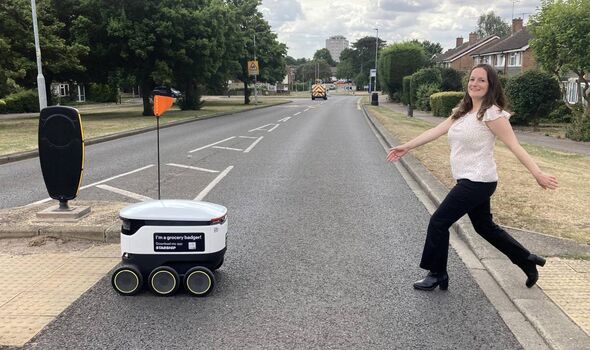 One customer recently rescued one of the store’s robots that had lost a wheel, returning it to the shop in their car. Another shopper met one waiting patiently at pedestrian lights.

“It asked the customer to press the button and then he said ‘thank you’ before crossing,” Ray chuckles. The robots are programmed to use certain expressions.

I notice Ray has said “he”, as I have done instinctively. You can’t help wanting to mother these friendly little machines. And Starship capitalises on that.

“It’s ultimately about adoption,” Andrew says. “If we go into areas and frustrate people or get in their way and become an annoyance, it’s never going to work.”

So what about animals? “Dogs are alarmed at first but they become used to them,” he says. Cats tend to sit on them, as cats like to do.

Each Starship launch in a new store is preceded by meet-and-greets in schools and community centres.

And so do the staff. They dressed their robots up as pumpkins for Halloween and reindeer at Christmas.

“There was an estate in Northampton where people put googly eyes on the robots,” Andrew smiles. “We had to ask them to stop because it was taking hours to take them off.”

Time to put our robot to the test. We close the top lid over the separate compartments for hot and cold foods, and away it rolls. The app alerts the customer that their delivery has arrived, and is used to unlock it.

Before long, I’m breaking a sweat in hot pursuit. I live in London so am no dawdler, n rly but this feels faster than “pedestrian speed”. Could disabled people or the elderly be at risk on pavements?

Andrew says not. “They’re built to take up the same footprint as a regular human being,” he says. A team will map the robot’s journey before launch to check its feasibility. If the paths are too narrow then they won’t go there.

As we follow at a distance, I spy the thrilled faces of children. One small boy, walking with his family, passes the robot and keeps turning back in disbelief. Another girl, aged about four, tugs on her mum’s arm and shouts in excitement.

“A lot of people jump in front of them, kids will touch them,” Andrew says. “People interact with them and we almost encourage that when they arrive in a new area.”

Do they ever get stolen? There wouldn’t be much point, he explains, and there would be a good chance of getting caught. “An alarm will go off and they record images,” he says. “It’s risk versus reward. The robots are useless to anyone who steals them as we would wipe off all the technology.”

I’m still half-running to keep up with our robot, which has finally rolled to a stop at a pedestrian crossing. It waits patiently for several cars to zoom past, and then waits some more. It’s the only time I see hesitation.

One shopper told me she feels sorry for them when they sit at zebra crossings and I understand what she means. They seem almost vulnerable.

Finally, the robot surges forward and makes a sharp right towards a housing estate. It has an antenna topped with an orange flag for greater visibility, which pings back into place if pulled.

Starship’s fleet, powered by zero-carbon electricity, has so far withstood icy winter paths in Estonia and climbed San Francisco’s vertiginous streets.The earliest black models were switched to white after they overheated in Arizona.

Many people doubted whether the robots could handle challenging terrain. “Northampton, where we launched two years ago, was our chance to show that,” says Andrew. “It’s not a new city, it has cobblestones.”

That launch coincided with the pandemic’s arrival. “Our volumes trebled overnight and never dropped off,” he says. “We had expected them to fall off a cliff [after the lockdowns finished] but it didn’t happen.”

Consumer behaviour has increasingly shifted towards so-called “top-up shopping”, where we buy extras outside of our normal purchases, and se the service’s 99p delivery fee is affordable. Bread, milk and bananas are the most popular items.

I ask Chris why Co-op introduced the robots in 2018. “We wanted to make sure we were ahead of the game and had an element of innovation,” he says. “From Starships’ perspective, we’re a great retailer who is well loved by the communities we serve,” he says. “It’s at the heart of everything we do.”

The grocer’s aspirations mirrored those of customers: Do the robots work? Do they break down? How trustworthy are they?

Early robots ran out of battery or got lost. Software updates have mostly corrected such faults but occasional mishaps still happen. In May, one robot went viral online after being caught on camera roaming Northampton’s woods.

Customers receive a phone notification if their robot is running late. “If they get stuck, people will tag us on social media and tell us we need to go and save them!” Chris says.

Back in Bedford, our robot crosses another road impeccably before reaching his journey’s end. There wasn’t (disappointingly) a single, dicey moment. In fact, the only drama comes from one grumpy runner who shouts: “It’s bloody dangerous – there are no signals or anything!”

In fact, the robot does have its flag and visible lights. Another worry is that they will eventually take delivery drivers’ jobs.

“Autonomous deliveries will play a part in delivering goods but they’re not the only way,” says Chris. “We’re recruiting extra Co-op colleagues to pick the orders going out in the robots.”

Today, Starship has 500 robots in Britain, 300 of which operate exclusively for Co-op. The Milton Keynes fleet is shared with Tesco and Andrew expects it to expand across other British supermarkets before long.

“The end game for us is to reduce those small car journeys,” he says. Starship has calculated that 280,000 fewer car journeys can be attributed to its robots.

And there’s been another unexpected benefit. People in Milton Keynes have officially reported improved feelings of security following Starship’s arrival. “Lots of people feel safer that they are there,” Andrew says.

In fact, once they get used to them, customers seem quite happy to know that these robots will be back.

Johnson says hopes this is the moment to get Brexit resolution