Meghan Markle is all 'me me me' says Angela Levin

According to reports, the Duke and Duchess of Sussex are considering whether to fly their children Archie and Lilibet to the UK in time for the funeral on Monday. The children have been separated from their parents for over a week and have been looked after by the Duchesses mother Doria Ragland in California.

The Sussexes were coming to the end of their tour of Europe when the Queen died at Balmoral Castle on Thursday.

According to The Daily Telegraph, the couple are considering whether to also help Ms Ragland come over to London for the state funeral.

However, the Sussexes were given a stark warning by royal fans on social media that they shouldn’t make the Queen’s funeral about them or into an attempt to promote their brands.

” The Queen wasn’t important enough for you to visit at Balmoral when she invited you!”

Royal expert Marlene Koenig, author of Queen Victoria’s Descendants, suggested that the Sussexes could use the opportunity to allow the King to see his grandchildren.

She replied to the harsh comment: “Or perhaps giving Charles the opportunity to see his grandchildren, a new family portrait with both sons and all grandchildren.

“Makes sense to me.” 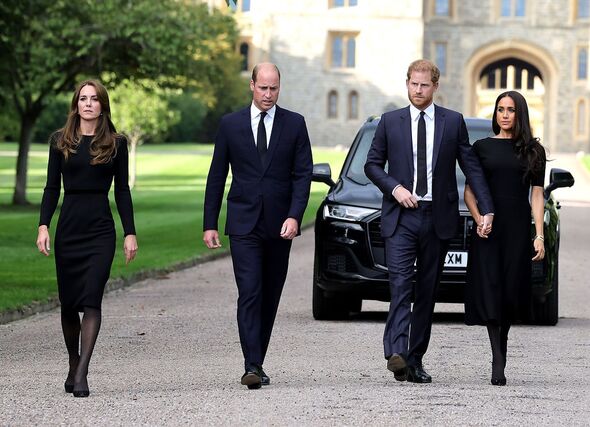 The Duke and Duchess of Sussex had to cancel an appearance at an awards show in London on Thursday as the Duke travelled to Balmoral once news of the Queen’s health broke.

There were initial reports that the Duke was on an RAF jet travelling to Scotland with Prince William, Prince Edward and his wife Sophie.

However, he flew in a private jet from Luton Airport and was in mid air when the historic announcement of the monarch’s death was revealed.

On Saturday, a spokesperson for the Duke and Duchess confirmed that they intended to stay in the UK for the period of royal mourning.