Meghan Markle 'did want to be Queen bee' claims Nicholl

Meghan Markle criticised the representation of Asian women across Hollywood productions in the latest episode of Archetypes. The Duchess of Sussex examined the “Dragon Lady’ stereotype showing female members of the Asian community as “sexually cold” and threatening “masculinity”. Meghan took aim at director Quentin Tarantino and Austin Powers actor Mike Myers for their stereotypical portrayal of Asian women.

She hit out at both men for “caricaturing” women as “over sexualised or aggressive” in the first episode of her Spotify podcast to air after a four-week break.

Discussing the matter with journalist Lisa Lind and comedian Margaret Cho, the Duchess of Sussex branded Kill Bill and Austin Powers as two examples of films “presenting caricatures of women of Asian descent.”

Austin Powers Goldmember faced much backlash over the Japanese characters of Fook Mi and Fook You, who were accused of “sexually tokenising” Asian women. 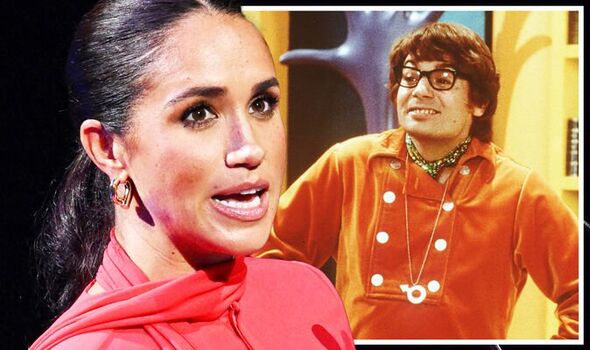 She told Ms Cho: “‘The Dragon Lady, the East Asian temptress whose mysterious foreign allure is scripted as both tantalising and deadly,’ she told Cho.

“This has seeped into a lot of our entertainment. But this toxic stereotyping of women of Asian descent, it doesn’t just end once the credits roll.”