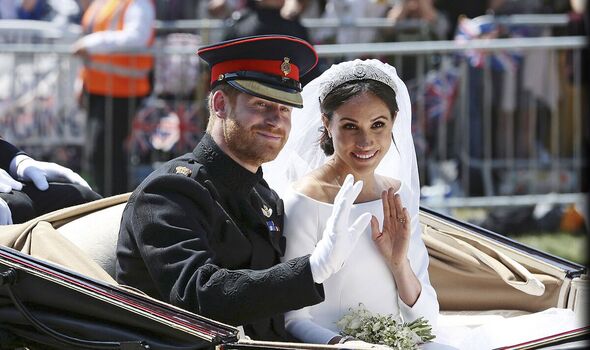 However, investigative journalist and royal biographer Tom Bower found it to be a deeply telling encounter. “Right at the beginning [of her interview], Meghan made it clear she wanted ‘to hit the ground running’,” says Mr Bower. “If you watch the video of the four of them, both William and Kate grimace, and William looks up at the ceiling as she says that. It was clear she wanted to become a campaigner and a celebrity.

“Harry whispered loudly, ‘Wedding first’. Meghan laughed and said, ‘You can multitask. Even at the time, people said it would never work out. It doesn’t take the benefit of hindsight.”

During research for his explosive account of the rift between the Sussexes and the Royal Family, published in paperback this week, Mr Bower discovered that Meghan had “constantly” sought platforms to speak before meeting Harry, and had, in his opinion, been “constantly shunned” in her attempts.

“She wanted to be Angelina Jolie; a celebrity and a famous influencer. But she was irrelevant,” he claims. “Being with Harry gave her that opportunity and she ‘played him’ from the start. Harry was groomed by Meghan. Her wedding guests were all Hollywood, not family, which shows her agenda. She always wanted to go back to Hollywood.”

The clues, it seems, were all there. And the fall-out from Meghan’s collision with the Royal Family has been intense.

Less than five years after that fateful joint interview – during which Harry, William and Kate were fully at ease in others’ company and Harry was buoyant and passionately focused on the charitable work to come – the brothers are estranged, and Harry continues to pour scorn on their previous close bond.

On the eve of publication of his devastating memoir, Spare – leaks and interview trailers which have, in Mr Bower’s opinion, revealed how low Harry is prepared to sink to trash his brother’s reputation – the biographer is speaking out about the crisis engulfing the House of Windsor.

This, he makes clear, is no farce.

Spare: by Prince Harry, The Duke of Sussex

Prince Harry’s highly anticipated and revealing memoir, Spare, launches on January 10, 2023. Available to pre-order now on Amazon, shop to read the gripping story of his life growing up in the royal household.

“This is treachery of the highest level. The point about this operation – and it is an operation – is that it is very skilfully calculated. Every appearance, every interview, is part of a jigsaw designed to build up Meghan as an international figure. It’s very cleverly devised.”

Mr Bower claims: “She has been an agent of destruction who knew exactly Harry’s vulnerabilities, and she played to them by offering a needy man a solution to his problems, and most of all an escape. I do believe he wanted to escape due to his intellectual weakness, emotional turbulence and unhealthy obsession with his mother.

“Meghan came in demanding not only parity [with Kate and William] but superiority.”

Mr Bower, a former producer of the BBC’s investigative programme Panorama, whose previous subjects have included Prince Charles, Jeremy Corbyn and Tony Blair among others, interviewed 80 sources for his latest book. He firmly believes Meghan never had any intention of staying in the UK, “Except on her terms, which was to be number one”.

“It could never end well. She is an intelligent, driven, ambitious woman who couldn’t understand how Kate, who had never seen poverty or experienced the continuous rejection that Meghan had faced building her career, was higher up the pecking order. She didn’t like the hierarchy; it isn’t the American Way.”

Mr Bower believes Meghan to be “a far greater narcissist than Harry”.

“He is privileged and pampered, and inclined to the over-dramatic,” he says.

“All those paparazzi shots of Harry outside nightclubs? He’d go out the front to abuse photographers to give publicity to the friends that owned the clubs.

“And his idea that his mother was murdered by the media is plain wrong. Diana collaborated with the media her whole life. She was killed by a drunk driver and by the fact she wasn’t wearing a seat belt.”

Meghan may have suggested a different interpretation, claims Mr Bower.

“I coined the view, taken up by everyone now, that Meghan has ‘her own truth’,” says Mr Bower.

He elucidates further in his book, writing: “Whatever Meghan believed became a fact. In her mind, she decided what she believed was true, and there was no possibility of contradiction. Contradiction of her truth was persecution. She sincerely believed that everyone had the right to ‘create our own truth about the world’.”

“This is what Harry has adopted,” says Mr Bower of her Hollywood-style rejection of a “universal truth”.

“That’s why I don’t believe a word Harry says. The idea that after Harry is hit by William – if it even happened – that the first thing Harry does is call his therapist on speed dial beggars belief.”

“And there is the caveat about the fight, is it even true? Harry is the strong man, not William. The truth is that of course William was terribly upset. Not only had Meghan been abusive towards staff, but she had also upset Kate.

“I do believe Harry was upset because his family told him not to marry Meghan, that he hated Camilla because of what she did to his mother, and that Charles was not the greatest father.

“The starter to all this was William urging Harry, in 2017, before the wedding, to take his time and not to rush into it. This is history; it happens in families all the time, but what is so shocking is that Harry is so disloyal. He claims to be the victim, but actually, he is the aggressor, in my opinion.

“It’s very cleverly devised. Damaging your brother and your father, and then saying you would love to have your father and brother back is an old trick: You have to attack to defend yourself. You are posing as the victim but really you are the aggressor.

According to Mr Bower: “The casualty is the Royal Family; these harmless people whose only purpose in life is to do good and serve the community, being traduced by Hollywood and publishers to increase their profit margins.”

The biographer adds that the Royal Family’s discreet silence, underscored by their belief that “dirty linen” should not be aired in public, is failing.

“The linen is being washed. The only way out of this, in my view, is that William has got to give an interview, renouncing Meghan’s lies and explaining how she threatened and challenged what are perfectly normal structures and hierarchies.”

Mr Bower says he would also encourage William to share his fears, which he believes are, that Meghan was going to sabotage the monarchy. “Which is exactly why he advised Harry not to marry her,” he adds.

“His advisors, who on the whole are second rate, can’t understand the challenge he is facing internationally and with young Britons who sympathise with Meghan and Harry.”

Since the leaked revelations about the alleged altercation earlier this week, popular opinion in the UK has sided with William for showing backbone in confronting his brother. But Mr Bower insists this is a particularly British way of reading the situation.

“That is not true in the rest of the world. If you believe that Meghan is a gifted saint, people will think [William] has behaved appallingly.”

Mr Bower disagrees that Harry and Meghan’s halo is being tarnished in America. He says there was a moment “after Oprah” where they lost some support, but since then their appearances at various award events have been “glorified – by the Democrats, in particular”.

One reason for this, he claims, is that the Sussexes’ advisors carefully select platforms that promote their point of view. “One of the great frustrations of this constant parade of their views is that they are never challenged.

Mr Bower cites an example. “In the Netflix documentary, Meghan said she had done research before meeting Harry for the first time. This contradicts entirely what she said to Oprah.”

The investigative biographer is particularly dismayed that when the couple were in the UK for the Queen’s funeral and staged their walkabout with William and Kate.

Depressingly, Mr Bower predicts only more of the same.

“The next is Meghan’s book,” he says, wearily.

“I think she will attack Camilla, she will attack Charles, and probably even The Queen. I think eventually they will exhaust the public appetite for recriminations, but there is a huge amount still to come. Harry knows an enormous amount about the secrets of the Windsors. He will keep the saga going.”

Sadly, Mr Bower believes there is little chance for reconciliation.

“Who would want to reconcile with someone who has caused so much hurt? It’s inhumane. All I can see is a great tragedy happening to the Sussexes. Meghan is a restless agent, not someone who can ever sit still.”

Revenge: Meghan, Harry and the War between the Windsors by Tom Bower (Blink, £10.99) is out now in hardback, paperback, eBook and audio. For free UK P&P on orders over £12.99, visit expressbookshop.com.