Meghan Markle and her husband Prince Harry joined members of the Royal Family at the state funeral for Queen Elizabeth II on Monday. While the Duke of the Sussex walked behind the Queen’s coffin as it was taken in procession to Westminster Abbey, the Duchess travelled by car along with Sophie, Countess of Wessex and Kate, Princess of Wales and Queen Camilla, who arrived in a separate vehicle. The royal women waited in the Abbey before joining their husbands in a short cortege to their seats.

The event was the first state funeral since Sir Winston Churchill’s in 1965. It was the biggest international event the UK has held in several decades which drew a television audience of over 26 million.

It put Meghan and Harry, who decided to step down from their duties almost three years ago, back in the royal spotlight. Their reunion with the Royal Family came amid speculation surrounding suspected tensions between the Sussexes and the House of Windsor.

But the royals seemingly put their own relationship woes to the side as they came together to mourn their matriarch. And Meghan, who is known to have struggled as a senior royal, has been praised for acting with “impeccable dignity”.

Gareth Russell, a royal historian and author, was a guest on this week’s episode of Royally Us. He told hosts, Christina Garibaldi and Christine Ross, that the Duchess was “note perfect at the funeral”. 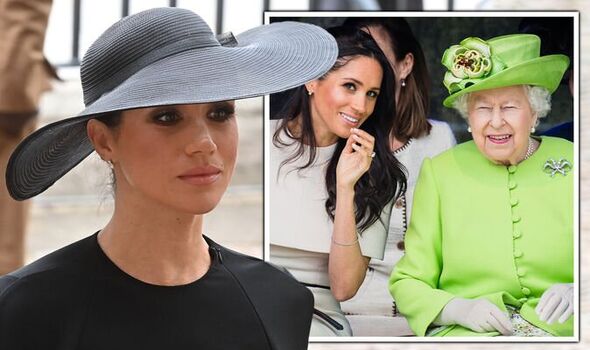 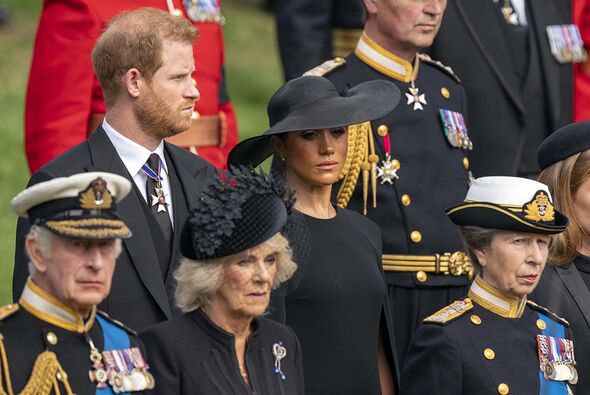 He added that the former Hollywood actress “behaved with impeccable dignity and solemnity.”

Both Meghan and Kate paid tribute to the late Queen with poignant fashion choices on the day of the funeral.

The Duchess of Sussex wore a stunning black dress by Stella McCartney, paired with the same style hat she wore for the Platinum Jubilee in June — perhaps a sentimental nod to the last time she saw the late monarch.

She wore the pearl stud earrings which had been gifted to her by the Queen. Back in 2018, Meghan appeared alone alongside her grandmother-in-law for the first time. 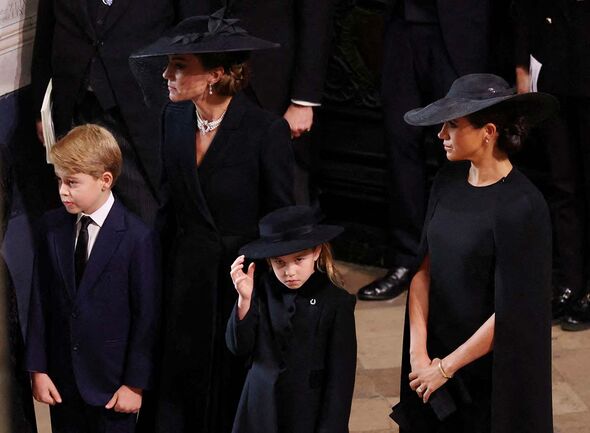 While visiting Chester on the royal train, keen royal watchers spotted Meghan’s pearl earrings. The Duchess reflected on her first solo engagement with the monarch during her and Harry’s bombshell interview with Oprah Winfrey.

She said: “We had breakfast together that morning, and she’d given me a beautiful gift, and I just really loved being in her company,” explaining that the gift was “some beautiful pearl earrings and a matching necklace”.

At the time Meghan first wore the earrings, they were identified as $1,095 (£965) Akoya Pearl and Diamond Earrings in White Gold from Birks, but it has since been speculated they could have come from the Queen’s personal jewellery collection.

Meanwhile, Kate paid a touching tribute to the late monarch by wearing the same Alexander McQueen coat dress she wore for June’s Trooping the Colour events — wearing a black version of the exact piece she sported in white to celebrate Elizabeth II’s 70 years on the throne. 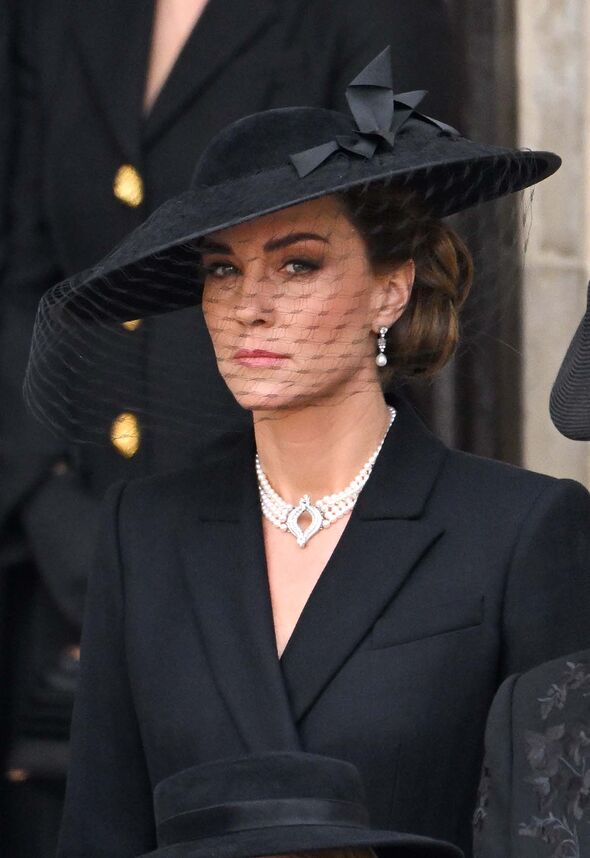 The Princess of Wales also honoured the Queen with her choice of earrings — her Bahrain Pearl Earrings which featured both pearls and diamonds. The earrings were a gift from the Queen, who had been gifted the pearls for her 1947 wedding from the Hakim of Bahrain.

Kate also wore them at Prince Philip’s funeral in April last year. She paired the sentimental earrings with the Queen’s four-row pearl choker, a gift reportedly from the Japanese government.

Meghan and Kate’s jewellery choices were steeped in history, with pearls being the gems traditionally worn during times of mourning.

Queen Victoria, who was appropriately dubbed the ‘Widow of Windsor’, famously chose pearls following the death of her beloved husband, Prince Albert. 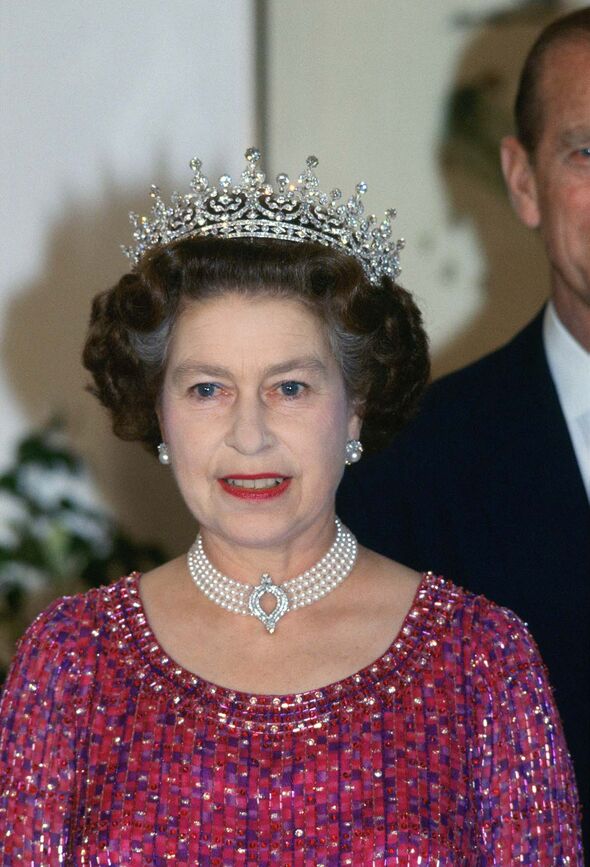 Given the formality of the events, Meghan and Kate were not seen interacting and were often separated by predecided seating plans. But Mr Russell hopes that a reconciliation could be on the cards, particularly for their husbands, who both took part in several solemn ceremonial events to mark the death of their grandmother.

He said: “I think, certainly, there is an expectation and a hope that this will have brought William and Harry closer together again. That does seem to be broadly what the British public would like to see.

“Funerals are a time when bridges can be mended or built. And yes, the King does want reconciliation with Prince Harry. I think hopefully we’ll see a Palace administration under Charles III that is a bit more flexible… I think most people are hopeful that the family will unite.”

It is understood that Meghan and Harry returned to the US on Tuesday, a day after the state funeral. 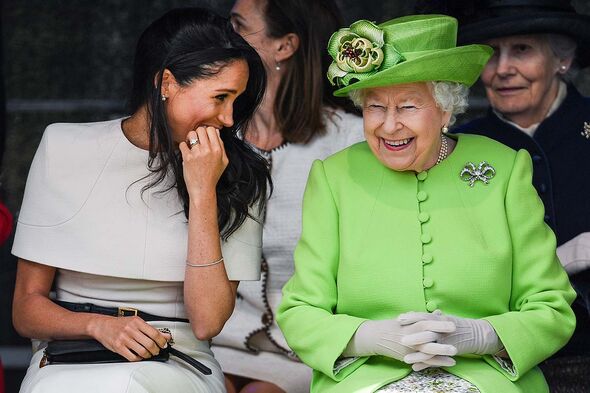 Mr Russell noted that the couple had not planned to stay in the UK for this long and they had been away from their two young children for over two weeks.

Meghan and Harry had arrived in the UK on September 4 for a week of charity events. On the day of the Queen’s death they were set to attend the final event of their stay but chose to cancel their appearance due to the monarch’s ailing health.

The Duke travelled to Balmoral Castle, where the Queen “peacefully died”. He joined several members of his family who had also made the journey to Scotland to be with the monarch.

Harry did not arrive at the estate until after news of the Queen’s death had been confirmed.

COVID-19: What can Google searches tell us about bullying during the pandemic?