The low key Duchess of Sussex cut a casual figure as she shopped in Whole Foods in Canada. The photograph, taken back in January just after Meghan Markle and Prince Harry left the Royal Family, shows the duchess with a trolley full of goods from the upmarket supermarket.

Meghan, wearing black trousers and a cream overcoat, looks relaxed in the ordinary surroundings as she appears to pay at the check out.

Her security guard appears behind her in the snap.

Meghan is said to have engaged in conversation with another mum, who was carrying her baby in the same sling she carries her son Archie in. 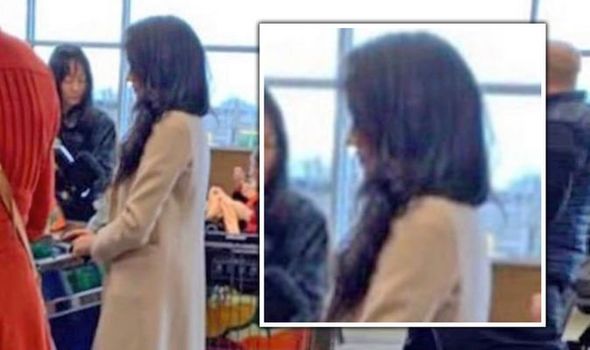 The 39-year-old was described as “super low key and down to earth” and is said to have complimented the fellow shopper’s “adorable” baby.

A fan page for the Duchess of Sussex wrote on Instagram: “Aww such a nice and rare picture to wake up to!

“Thank you to those who sent me this image via messages. It is a photo of Meghan in Canada, January 2020 at the checkout line at @wholefoodsbc.

“According to the person who took it: Meghan approached her friend who was carrying an ergo baby carrier and said ‘your baby is so adorable’ and mentioned them having the same baby carrier.

“Meghan was described as ‘super low key and down to earth’.

“For those having doubts you can actually see her security detail behind her!”

Fans of the duchess were delighted to see Meghan looking “totally relaxed”.

One posted on Instagram: “Meghan just being herself and looking totally relaxed, at ease and gorgeous!

“They chose Canada as a transition point for a reason. Public figures are left alone and given their space. I hope the Sussexes enjoy the same privacy in Santa Barbara. They deserve it.”

Another said: “How absolutely wonderful they’re able to lead somewhat of a ‘normal’ life now. Well as normal as can be.”

One posted: “She is just like us all going shopping for our families very down to earth.”

It comes after reports Meghan, her husband Harry and their son Archie, who are now living in LA, will not be attending Balmoral to see the Queen and Prince Philip this Summer.

A royal source told how Meghan “doesn’t feel like she’s missing out” on visiting the Queen despite her husband Prince Harry being “upset” he won’t be able to spend time with his grandmother.

She is said to be “too busy” to worry that she won’t be able to travel to Scotland for the royal gathering with her husband’s family.

But Prince Harry is said to be frustrated he cannot travel from LA to the UK to spend the Summer with the Queen and Prince Philip due to coronavirus pandemic.

A source told In Touch Weekly: “She doesn’t feel like she’s missing out.

“She’s been too busy decorating their new Montecito mansion.”

Royal guest list: Which of Princess Beatrice’s friends and family were at her wedding?