During Mr Trump’s state visit to the UK last year, Meghan managed to dodge attending any official functions such as the state banquet at Buckingham Palace. She was on maternity leave at the time, with Archie who was just one-month-old. Yet, she still managed to attend Trooping the Colour that very same month.

This led some to question whether her absence from the state dinner was perhaps a deliberate snub to the President, whom she had previously criticised.

Before the US election four years ago, Meghan branded Mr Trump “divisive” and “misogynistic” while on The Nightly Show with Larry Wilmore.

“I think it was in 2012, the Republican Party lost the female vote by 12 points ‒ that’s a huge number. 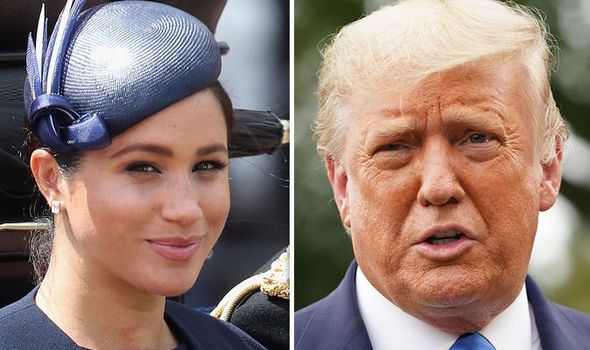 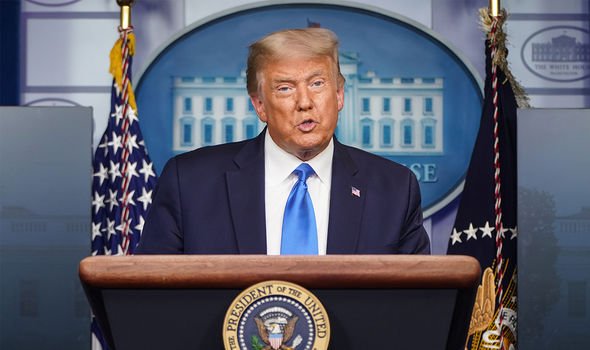 “And with misogynistic as Trump is, and so vocal about it, that’s a huge chunk of it.

“You’re not just voting for a woman if it’s Hillary {Clinton] just because she’s a woman, but certainly because Trump has made it easy to see that you don’t really want that kind of world that he’s painting.”

When confronted with these comments ahead of his state visit to the UK, Mr Trump branded them “nasty”, but added that he still thought Meghan would make a very good American princess.

Perhaps her absence was to avoid any awkwardness for the rest of the Royal Family and dinner guests, given how well-reported their little spat was. 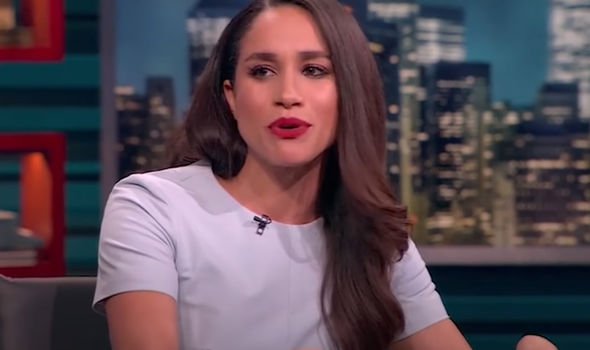 This year, after Prince Harry and Meghan stepped down as senior royals and moved to the US, they have been far more vocal politically.

Last month, Meghan took part in an When All Women Vote virtual event, where she told viewers that “we all know what’s at stake this year”.

Speaking from her Montecito home, she said: “If we aren’t part of the solution, we are part of the problem,” adding that people who don’t vote in the election are “complicit”. 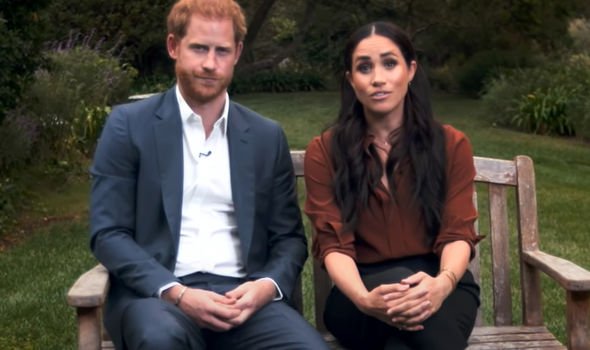 She also teamed up with feminist icon Gloria Steinem to try and encourage people to vote.

Then this week, the Duke and Duchess appeared together in a Time100 video about National Voter Registration Day, again encouraging people to sign up to vote.

Meghan has not explicitly said which party or which presidential candidate to vote for in any of her media, but due to her previous comments, many have interpreted her to be a supporter of Democratic nominee Joe Biden.

What’s more, Harry is actually well acquainted with the former Vice President, because Mr Biden has been a supporter of, and attended, the Invictus Games several times.

The Invictus Games is a Paralympic-style event featuring injured and sick armed forces personnel and veterans competing in adaptive sports, and was created by Harry.

In response to the Time100 video, Mr Trump said: “I’m not a fan of hers. She probably has heard that.

“But I wish a lot of luck to Harry because he’s going to need it.”

Princess Diana tribute: How Kate and Meghan made subtle nod to mother-in-law with choice