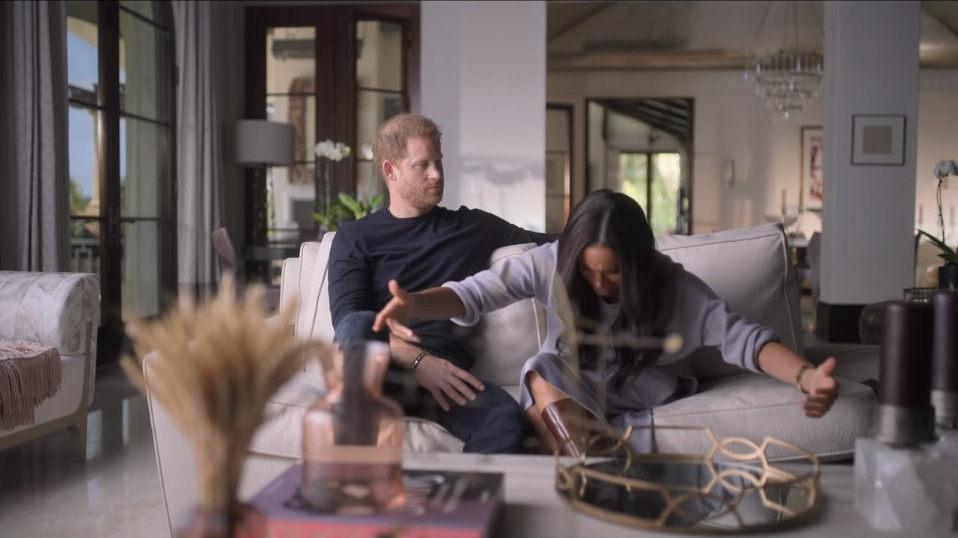 Meghan mocked royal protocol as she recalled meeting the Queen – bending over double in a grovelling curtsey.

Harry looked on unsmilingly as his wife giggled at the memory of being introduced to his late grandmother.

The Duchess said she had little warning of the meeting shortly after going public with their relationship in 2016.

‘We were going to the Royal Lodge for lunch, and he was like, “Oh, my grandmother is here. She’s gonna be there after church.”

‘I remember we were in the car, ­driving and he’s like, “You know how to curtsey, right?” And I just thought it was a joke.’

She said she drew on her ­recollections of Medieval Times, a Texas-based chain of theme parks that offer shows and dining experiences and claims to bring the Middle Ages to life.

In her 2021 interview with Oprah Winfrey, Meghan said that Sarah ­Ferguson, the Duchess of York, taught her how to curtsey to the Queen shortly before their first meeting.

‘Apparently I did a very deep curtsey. I don’t remember it. And then we sat there and we chatted,’ she told the talk show host. But she recovered the memory and showed her move to Netflix.

‘Pleasure to meet you your Majesty,’ she squeaked in recollection. ‘Was that OK?’ she asked, turning to Harry.

Meghan was less jolly as she recalled trying to hug William and Kate when they first met.

‘They came over for dinner. I remember I was in ripped jeans and I was barefoot,’ she said.

‘I was a hugger. I’ve always been a hugger. I didn’t realise that that is really jarring for a lot of Brits.

‘I guess I started to understand very quickly that the formality on the ­outside carried through on the inside, and that was surprising to me.’

'Court president should explain why he took debt cases from me'