Meghan Markle looked stoic as she travelled to Westminster Hall alongside Kate, Princess of Wales, Camilla, Queen Consort, and Sophie, Countess of Wessex. She shared a car with the Countess of Wessex, following that of the Princess of Wales and Queen Consort. The group travelled to Westminster Hall, where the Queen’s coffin will begin a period of lying-in-state after a brief overnight stay at Buckingham Palace. King Charles, Prince William, Prince Harry, Princess Anne, Prince Andrew and Prince Edward are leading the procession on foot to Westminster.

The Duke and Duchess of Sussex stepped back from royal life in 2020, surrendering their royal responsibilities and HRH titles in their relocation to the United States.

Relations have long been strained, according to reports from Palace sources, but the return of the Duke and Duchess has been seen as a show of unity from the ex-working royals with the Firm.

The Duke and Duchess arrived in the UK earlier this month, ahead of a slew of charity engagements in the UK and Germany.

They have remained in Britain following the announcement of the Queen’s ailing health and death. 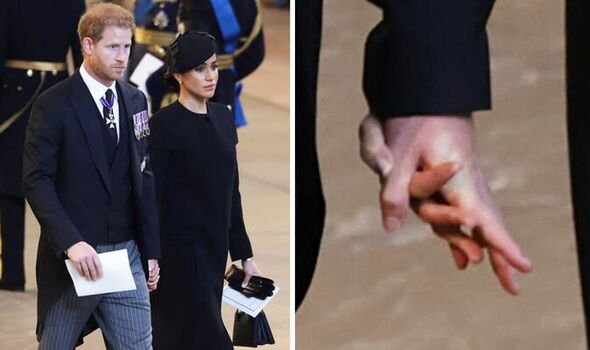 They stunned crowds gathered outside the royal residence at Windsor Castle on Saturday as they emerged with Prince William and Kate for a 40-minute engagement, looking at tributes laid by the public to the Queen.

The Prince of Wales is understood to have invited the Duke and Duchess of Sussex to the walkabout, ahead of the procession on Wednesday.