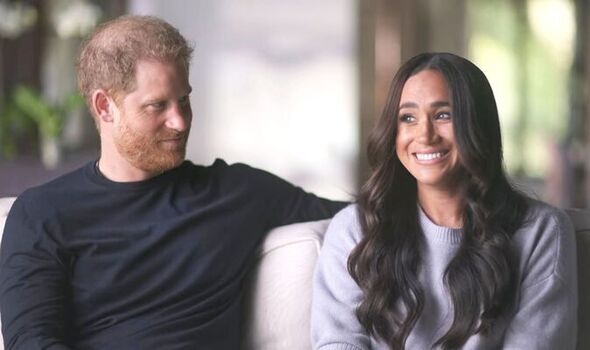 The Duchess of Sussex has faced renewed backlash after the much anticipated Netflix docu-series unveiled her “mocking” impression of a historical royal tradition. In the second episode of ‘Harry and Meghan’ the Duchess of Sussex recreated the curtsy she performed in front of Queen Elizabeth II during her first meeting with the late monarch. As Meghan performed, her husband Prince Harry sat beside her, appearing bemused and glancing away as his wife sat upright again. Body language expert Jesús Enrique Rosas was quick to share his assessment of the Prince’s reaction.

His opinion was echoed by royal author Gyles Brandreth, who told Talk TV: “It’s embarrassing because it is mocking.

“Nobody curtsies to the Queen like that and nobody would have advised her to do it that way.”

He added: “To do this sort of mocking thing is uncomfortable, but it is a cultural difference. It’s like you would do a curtsey if you were playing in Snow White.”

In the Netflix series, Prince Harry revealed the late Queen was the first senior member of the Royal Family to meet Meghan.

The Duchess explained: “I didn’t know I was going to meet her until moments before.

“We were in the car and we were going to Royal Lodge for lunch, and [Harry] was like, ‘Oh, my grandmother is here, she’s gonna be there after church.’

Read more: ‘Poor Princess Di would have been appalled by Harry and Meghan’

In the show, the Duchess performed a recreation of her curtsy at the time, extending her arms wide and bowing her head dramatically towards the floor.

As she rose from the position, she added: “Pleasure to meet you, Your Majesty.”

She described meeting the Queen as “intense” and confessed: “I didn’t know what I was doing.”

After the Queen left, Meghan revealed Princess Eugenie and her now husband Jack Brooksbank had assured her she did “great”.

As the docu-series continued, Prince Harry recalled: “I remember my family first meeting her and being incredibly impressed.

“Some of them didn’t quite know what to do with themselves. So I think they were surprised.”

He joked: “They were surprised that the ginger could land such a beautiful woman – and such an intelligent woman.”

The Duke suggested the Royal Family’s initial “judgement” of Meghan had been “clouded” by her status as an acclaimed American actress, which he claimed led some family members to believe their romance wouldn’t last.

Read next:
Harry and Meghan will ‘always be wrong’ says royal expert
TalkTV sparks uproar as Meghan and Harry told ’suck it up’
King Charles refuses to back plot to axe Harry and Meghan royal titles
Meghan’s claim of ‘never wearing colour’ in UK debunked in pics
Harry falsely claims that he ‘had to’ propose to Meghan in the UK

Delivery driver killed girl and carried on to drop off takeaway