Home » Europe » Mel Gibson Braveheart statue has Twitter in stitches- ‘Has he stepped on a piece of Lego?’ 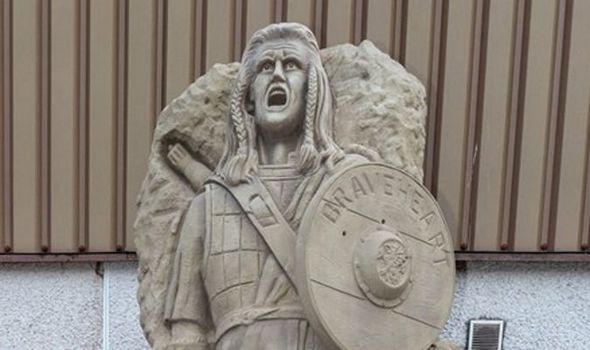 Brechin City Football Club revealed a 13 foot William Wallace statue at its Glebe Park stadium in Angus. After its unveiling yesterday, Twitter has been in hysterics due to the statue’s strange appearance and dissimilarity to the Mel Gibson character.

The football club gave fans a glimpse of the 12-tonne sandstone piece in a tweet captioned: “BRAVEHEART STATUE UNVEILING. We were delighted to host the unveiling of the Braveheart Statue yesterday afternoon at its new home at Glebe Park.

“It was brilliant to see the community of all ages turn out in numbers to support the event.”

Hundreds of people have taken to the comments to share their disbelief. One user said: “Why have you accidentally carved a statue of Mel Gibson with his kilt caught in a train door? Wallace didn’t look anything like that.”

Another replied: “Has he accidentally stepped on a piece of Lego?” And another displeased user said: “My god that’s sh***.”

A fourth said: “B****cks to Scotland’s problems, let’s have a statue of Mel Gibson outside Brechin City football stadium, the Ronaldo statue looks quite decent now.”

The Braveheart statue previously stood at the entrance to the William Wallace Monument in Stirling for 10 years but has been moved to Brechin City football ground to honour its sculptor, Tom Church, who is a Brechin local.

The club also says a bucket collection at the unveiling raised a “brilliant amount” for a kidney dialysis charity.