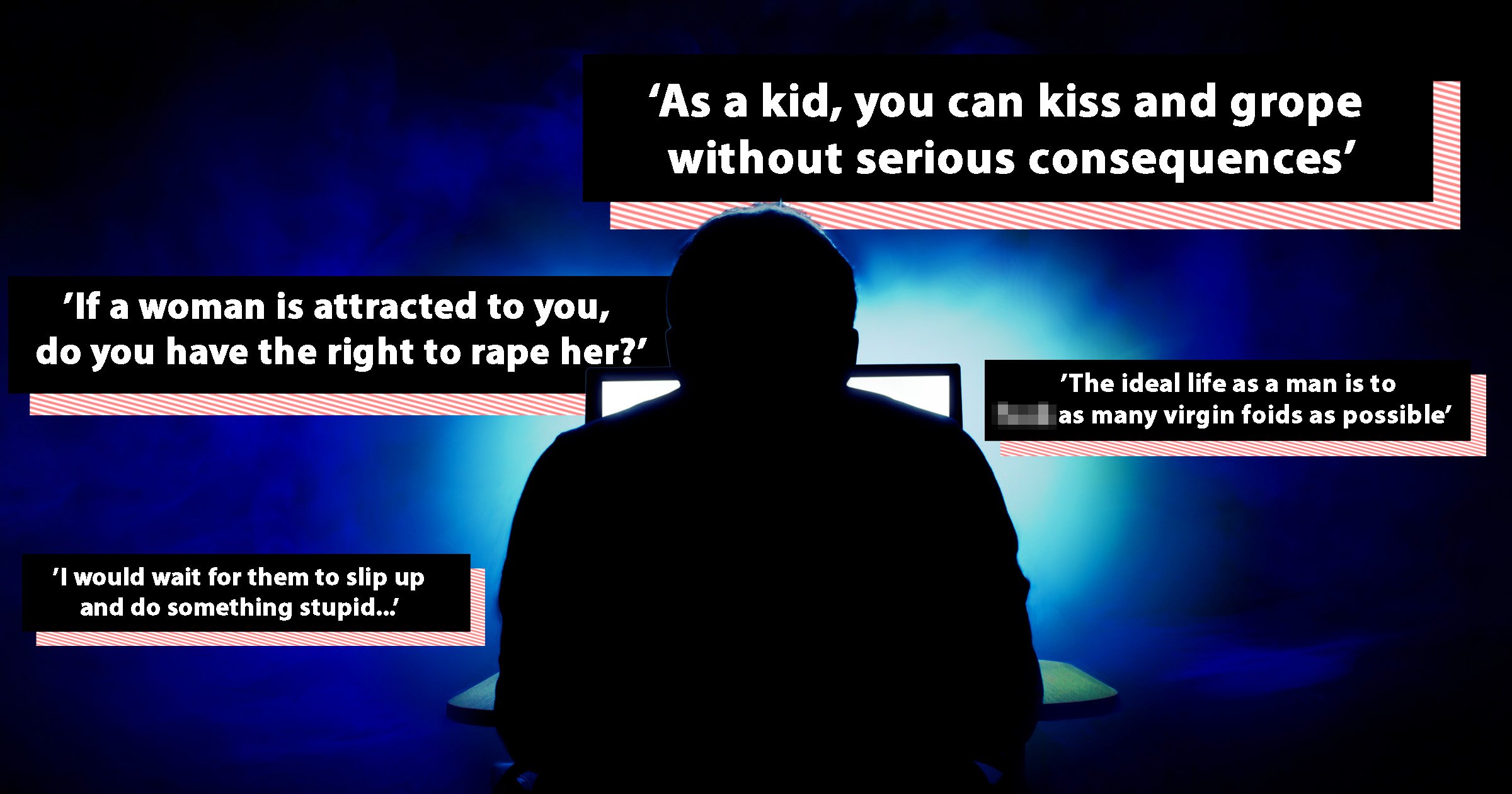 ‘Does rape count as losing your virginity?’, this is the title of one of the first threads I stumbled on after secretly joining a popular incel website.

Discussions about sexual assault, paedophilia, suicide and mass shootings grow more and more violent as I dive into some of the darkest corners of the internet.

Short for ‘involuntary celibates’, incels are mostly heterosexual men who ‘forge an identity around a perceived inability to form sexual or romantic relationships’.

Like mass shooter Jake Davison, who killed five people, then shot himself dead in Plymouth in 2021, they hold deeply misogynistic beliefs, and some have been linked to violent attacks.

Metro.co.uk has decided not to name the website in question, but a quick Google search lead us to this ever disturbing world.

Apart from having to answer a few questions from moderation staff after signing up, my time was spent as a silent observer, reading just a small portion of the 10 million posts.

So, what do they really think about women?

As it turns out, this is not just a group of people frustrated they cannot get a date.
Most members encountered believe women’s true value is the ability to procreate or to fulfil the sexual desires of men, and in fact they are not even seen as human.

Incels blame them for their perceived failures to receive what is ‘rightfully owed’ in life.

That is because women always go for ‘Chads’ – the archetypical white alpha male, who are tall, muscular, square jawed and with a full head of hair, who are seen as sexually desirable.

Women on the website are often referred to as ‘foids’ – used to indicate that they are not fully human, and are either sub-human or ‘other’.

This has led incels to develop further disturbing theories that women are to be sexually assaulted and physically abused.

‘Anyone wished they could go back to high school so they could rape foids with insufficient consequences?’, one member wrote.

‘I’m extremely jealous of the f*g babycels on here, 15 or 16-years-olds on here while going to school surrounded by all that fresh, virgin p***y.

‘It makes me go mad at how stupid they are for not taking advantage of status as babies in society and not raping their foid classmates.

‘This is literally the only time you will be surrounded in your life with the freshest and tightest p***u ever and yet you do nothing but watch all the little chads f**k them instead.’

Another with the name of ‘Scarborough Rapist’ replied: ‘Not rape but I would wait for them to slip up and do or say stupid s**t to me so that I can beat the s**t out of them.’

A third one commented: ‘I 100% see your point. As a kid you can kiss and grope without serious consequences. ‘

Further recent threads discussed ‘Why ethnic men are dating white women’, ‘If a woman is attracted to you, do you have the right to rape her?’ and ‘I got accused of rape.’

Another recent post read: ‘The ideal life as a man is to f**k as many virgin foids as possible.’

As I joined the website in November, nominations and voting was taking place for the annual Incel Awards – the first major community event.

Categories include ‘incel of the year’, ‘best lurker’, ‘biggest retard’, and ‘funniest incel’.

Alongside ‘foid’, ‘normie’, ‘Chad’, ‘blackpill’ and ‘redpill’, ‘roping’ is also one of the specialist terms often used on the site, which boasts almost 20,000 members.

Discussions about suicide linked to male depression are open, and men who show an interest in that are encouraged and praised as brave.

Members often complain about ‘incel struggles’ under the hashtag ‘suicide fuel’ on the website.

One wrote: ‘Imagine being an incel and finally have a family, but your son turns out to be a f*g.’

‘Looking at fellow currycells [a derogative term for Indian incels] getting foids and having sex is the biggest suicide,’ a member said.

‘They want us culled,’ a member replied. ‘Women are evil,’ another posted.

One of the comments read: ‘That’s why you should never kill yourself. You are giving women a victory.’

A number of incels spoke openly about how their life will likely end with suicide, turning the forum feeds into a dark, self-loathing echo-chamber – and once you are in, it is hard to leave without help.

Like any other website, there are rules – albeit unsure how strict moderation staff are – that even incels have to obey to remain part of the community.

Firstly, women and anyone for the LGBTQ+ community are forbidden from joining and those who are not incels.

Members are told not to request personal romantic or sexual experiences, even if they happened a long time ago, or even discuss it – though this rule seem to be ignored quite often.

Perhaps one of the most disturbing rules is that moderation staff were forced to ban any content which ‘sexualises minors in any way, shape or form’.

Introduced only this March, it was changed two days later to ‘do not sexualise pre-pubescent minors in any way, shape or form’.

Another rule banned any ‘gay of LGBT content’, unless members were criticising it.

Posts celebrating an incel ‘going ER’ – committing an indiscriminate mass murder, particularly one that targets women – are allowed on the website.

But a member saying they plan to ‘go ER’ or are encouraging a fellow to do it are forbidden.

Such sites promoting hate against women have been under scrutiny for years, and Reddit has previously shut down incel subreddits with tens of thousands of users.

According to the Department of Education, incels are part of an ‘unclear or unstable ideology that supports extreme violence’ by the UK government.

It targets a ‘perceived other’ of some kind (perhaps based on gender or another protected characteristic), but do not otherwise identifies with a particular terrorist ideology or cause.

Though there are members from across the world, a week after I joined an ‘oldcel’ – someone whose inceldom can be attributed to being desexualised due to their old age – set up a weekly meetup for UK-based incels in London.

Coronavirus: What is a social lockdown and will it work?