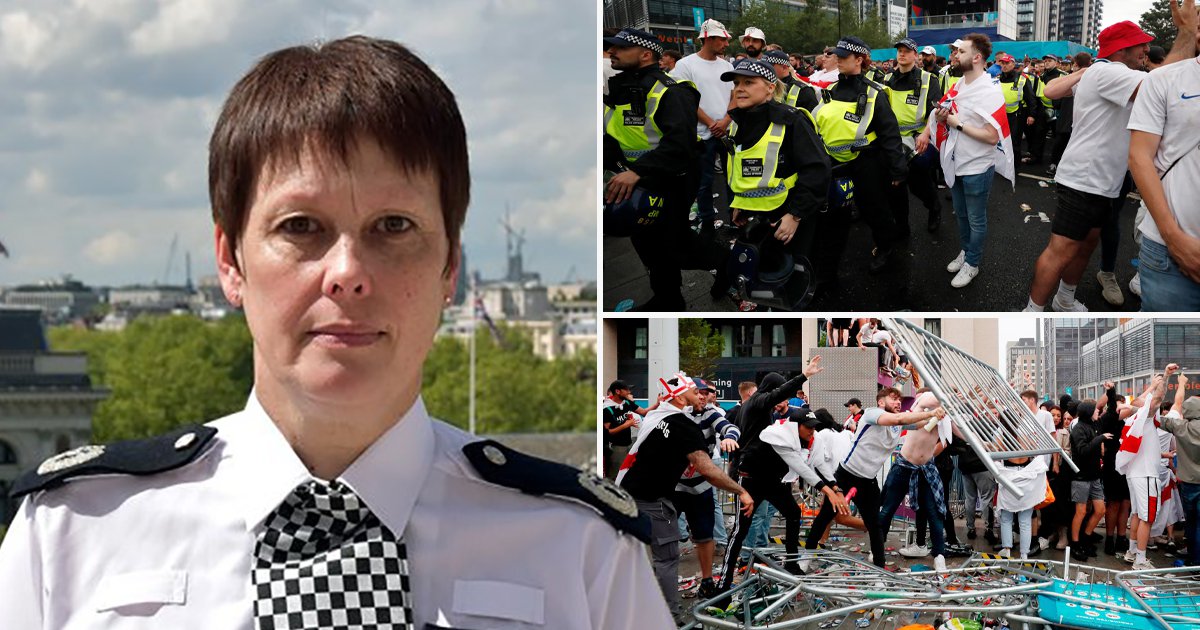 The Metropolitan Police has denied the operation around the Euro 2020 final was a ‘failure’, saying the match could have been called off if they had not immediately stepped in.

Deputy Assistant Commissioner Jane Connors issued a strident defence of the force’s approach, while condemning the minority of supporters who caused chaos at Wembley Stadium.

Hordes of ticketless fans – described as ‘drunken yobs’ by Football Association chief Mark Bullingham – pushed through security and fought with police trying to get into Sunday’s showpiece between England and Italy.

Ms Connors said she does ‘not accept that the policing operation failed’ and has ‘no doubt’ that officers’ ‘swift action prevented any further escalation’.

She added: ‘I do not accept that the policing operation failed and I stand by the difficult decisions made by police officers and the Met’s public order commanders.

‘Without their immediate intervention, it is possible that this game could have been abandoned.’

The force said that 51 people were arrested over disorder linked to the final, and that 19 officers were injured, including one who suffered a fractured hand and another who had a tooth knocked out.

The FA has announced it is conducting a full review into the matter, while European football’s governing body UEFA has appointed an inspector to carry out its own investigation into what occurred, as well as issuing charges related to other supporter misconduct inside the stadium on Sunday.

In a statement, Ms Connors said: ‘This was meant to be a day of national pride, full of jubilance and celebration.

‘In the main, the day was exactly that. However, it was sadly tarnished by a minority of disorderly and violent fans who attempted to hijack the final for their own selfish personal gain.

‘Throughout the course of the day, police officers witnessed disgraceful behaviour both in central London and at Wembley, where a number of people pushed through security cordons or fought with police officers.

‘Ahead of the final, police commanders deployed one of the most significant and comprehensive policing plans the Met has ever committed to a football match of this scale. In Wembley, soon into the day it became clear that a high number of fans were arriving without tickets.

‘Police commanders recognised this could result in ticketless fans attempting to get into the stadium, they updated security officials at Wembley of this risk. To support the stewarding efforts, further highly trained public order officers were deployed to Wembley Stadium as a precaution.

‘Soon after gates opened, the stewarding and outer security perimeter became overwhelmed and fans began pushing through security checks. I want to praise the quick response by police commanders and those brave officers who confronted these subsequent scenes of disorder and violence.’

Julian Knight, the chair of the Digital, Culture, Media and Sport (DCMS) committee, has written to the FA seeking more information.

He wrote: ‘The sheer number of ticketless people breaching the temporary, and arguably insufficient, barriers and physically attacking stewards and police to force their way into the match was appalling.

‘In The FA’s statement on the matter, it stated that “security and stewarding numbers for the Euro 2020 final exceeded the requirements for the match and were greater than any other previous event” at the venue. Clearly the numbers were still insufficient.’

The letter went on to pose a series of questions to Mr Bullingham around security arrangements.

Mr Knight said the committee was seeking a response by Tuesday.