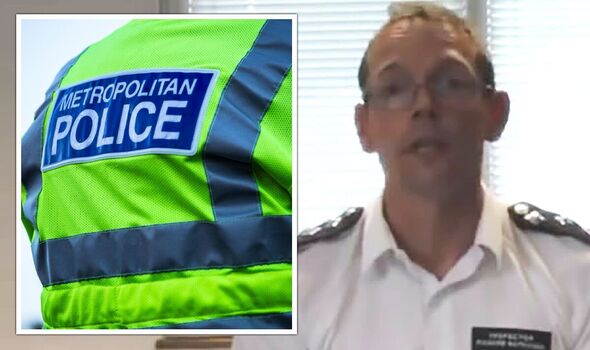 This is a picture of the senior Met Police officer found dead at his home after failing to report at a police station on the morning he was “due to be charged over child abuse images”. Chief Inspector Richard Watkinson’s body was found by colleagues who had gone to his address that afternoon.

The Sun reported a source told the newspaper the 49-year-old was involved in his own death while under “huge mental strain”. Met Police said in a statement the death of the man was not suspicious but being treated as “unexplained”. An inquest is due to take place at a later date.

A photograph from a video of Chief Inspector Watkinson from 2020 shows the officer, nicknamed “Smashy”, in his role with the Met’s West Area Basic Command Unit where he worked.

It is believed that Watkinson was due to report back on bail last Thursday to be charged. Mr Watkinson is said to have feared he was about to be publicly named in connection with the alleged conspiracy to distribute indecent images of children.

A Met Police spokesperson said: “Met officers attended an address in Buckinghamshire on the afternoon of Thursday, 12 January following welfare concerns and found the body of a man in his 40s’.”

A spokesperson for Thames Valley Police said: “Officers were called to Saunderton, Princes Risborough, at just after 3.35pm on Thursday 12 January. Sadly, the body of a man was located inside a property at that location. The man’s death is unexplained but not suspicious. A file will be prepared for the coroner.

“His next of kin have been made aware and our thoughts are with the man’s family and friends.”

Watkinson was first arrested in July 2021 when it is alleged that up to thousands of indecent images were allegedly discovered in a secret room at his home.

His arrest stunned his colleagues and he was originally held over allegations of misconduct in public office, sending obscene messages, the corrupt exercise of police powers and data protection breaches.

It is alleged child sexual abuse images were found on the computers, and the material was judged to be category the two most serious levels. After the alleged discovery of the illegal material, Chief Inspector Watkinson was further arrested 11 days later.

His arrest was on suspicion of several offences, including conspiracy to distribute indecent images of children, voyeurism and misconduct in public office. He was released on bail and suspended from duties while an investigation was carried out by the Met’s specialist crime officers working with officers in Scotland and Lincolnshire.

Last week, officers charged two men with conspiracy to distribute or show indecent images of children. They are due to appear in court shortly.

One former colleague said: “He was a popular governor and his arrest caused a great deal of shock. There was talk of thousands of images and videos being found behind a trap door in his home.

“He had been under huge mental strain while he was on bail and there were concerns that he was suicidal. The worst fears for his health have now been realised and he was found dead last week. It is suspected he killed himself.”

The Samaritans can be reached round the clock, 24 hours a day, 365 days a year.

If you need a response immediately, it’s best to call them on the phone. You can reach them by calling 116 123, by emailing [email protected] or by visiting www.samaritans.org.

Fraudster who stole £200k from pensioner killed with crossbow jailed