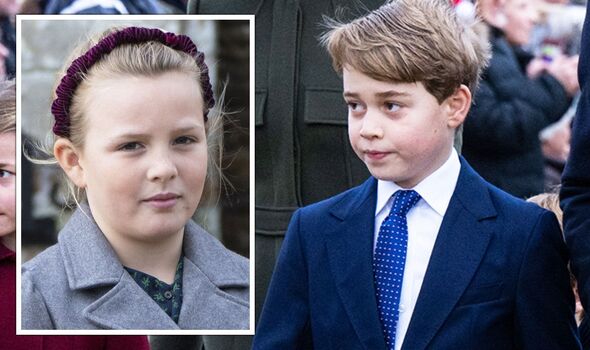 A playful moment between Prince George and his cousin Mia Tindall captured the attention of spectators gathered to watch the Firm’s Sandringham walkabout. Members of the Royal Family came together to mark the festive season with a traditional service at Sandringham Church. Following the service, excited royal fans were greeted by members of the firm, but cheeky Mia nearly disrupted the show as she attempted to draw Prince George away from the crowd.

Nine-year-old Prince George was flanked by his parents the Prince and Princess of Wales as he and his two younger siblings – Princess Charlotte and Prince Louis – chatted with the public on Christmas Day.

As the young royal took centre stage in the Christmas Day walkabout, he was nearly distracted by his cheeky cousin, eight-year-old Mia Tindall.

In a video clip of the sweet interaction, Prince George can be seen captivated by the crowd as Mia walks by and pokes him, in an attempt to snatch his attention.

Prince George remains engrossed in the festive walkabout and doesn’t turn, leaving Mia to walk away, disappointed but laughing.

Mia is the eldest child of Zara Tindall, daughter of Princess Anne, and her husband, former rugby player Mike Tindall.

Though technically a second cousin to Prince George, the youngsters appear to share a close relationship and are frequently seen at one another’s side during large-scale royal events.

Earlier this year, the duo were captured laughing and joking together on the last day of the late Queen’s Platinum Jubilee celebrations as members of the family gathered to watch the Pageant.

Read more: Harry ‘stormed off in a huff’ after royal fan’s Christmas request

However, it appears Prince George hasn’t always shared a close-knit and friendly relationship with his cousins.

Back in 2018, while watching his father play in a charity polo match, Prince George took a tumble down a grassy hill following a nudge from his older cousin, Savannah Phillips.

Savannah, who is the eldest grandchild of Princess Anne, was given a swift telling off by her mother, Autumn.

Prince George, who was seven years old at the time, was consoled by his mother and appeared to make a swift recovery.

During Sunday’s church service and subsequent walkabout, Princess Anne was notably absent from the crowd of senior royals.

Sources close to the royal have suggested Princess Anne was unable to attend as she was suffering with a nasty cold.

Among the Christmas crowd, Prince Andrew made a rare appearance alongside his two daughters Princess Beatrice and Princess Eugenie.

The Duke of York has scarcely attended public events in the past few years, although he was seen in September, throughout the official mourning period and state funeral service for the late Queen Elizabeth II, his mother.

Read next:
Prince Andrew gives royal fan some ‘odd’ advice on Christmas Day
Charles ‘furious’ after being snubbed by Queen in favour of Edward
Kate ‘declined’ first invitation to royal Christmas at Sandringham
Inside King Charles’ two Scottish properties
Beatrice stepped out in Kate’s dress but with two style differences

BBC Newsnight: Chief Constable on violence against women – ‘Not about victim blaming’