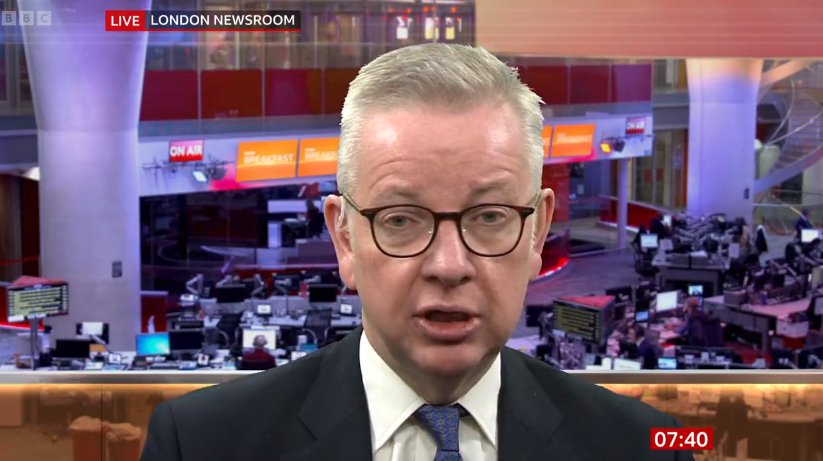 Michael Gove’s round of interviews were dramatically delayed this morning because he got stuck in a BBC lift.

The Cabinet minister was booked in for the 8.10am slot on the Today programme but did not appear in time.

‘We were hoping to talk to Michael Gove,’ presenter Nick Robinson told listeners. ‘You might have been hoping to hear from Michael Gove at this time.

‘He’d very kindly come into the building, so we didn’t have to deal with one of those awkward line failures.

‘Mr Gove is stuck in the Broadcasting House lift. I wish I could say this is a joke, it is not a joke.

‘It is not very funny for Mr Gove and security men who have been stuck there for some time.’

Mr Robinson said the Tory politician was ‘keeping cheerful’ and even offered to talk to the team on the phone from the lift.

But he said they were holding out for the communities secretary to be released and appear on air a ‘little bit later in the programme’.

When Mr Gove eventually resurfaced at around 8.30am, the presenter offered him ‘apologies on behalf of the BBC’.

Mr Gove replied: ‘After more than half an hour in the lift you successfully “levelled me up”, so I’m delighted to be here.

‘I completely understand, these sorts of things happen. If you and I together given ammunition for Armando Ianuuchi for the next episode of W1A, then fine.’

The minister was then told a new hashtag #freemichaelgove had begun circulating on Twitter.

He added: ‘I suspect there are probably rather more people who are hoping I’ll be incarcerated for longer, but still.’

W1A is a comedy series set in Broadcasting House which parodies the internal workings of the BBC.