Brexit: Expert says to 'plan in advance' for taking pets on holiday

An earlier survey showed 99 per cent of people supported making microchipping of cats mandatory. The charity Cats Protection estimates 2.6 million cats in the UK – around 26 percent – are not chipped. Eight out of 10 strays handed in to its adoption centres in England during 2018 were unchipped, it said, leading to long and sometimes unsuccessful efforts to reunite them with their owners.

The chips are roughly the size of a grain of rice and are inserted under the skin over the back of the neck.

Each has a unique serial number and, if a cat gets lost, a vet can scan it to reveal who its owner is and their address.

Compulsory dog microchipping was introduced in 2016.

Stray cats who didn’t have chips include Larry the tabby, who was found in London and taken to Battersea Dogs and Cats Home.

He was then adopted as Chief Mouser to No10 Downing Street and the Cabinet Office. 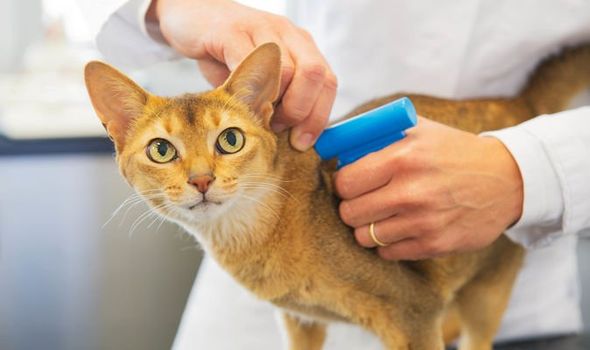 Cats Protection’s chief executive James Yeates said: “Having a microchip gives a lost cat the best chance of being quickly reunited with their owner.

“We regularly hear heartwarming stories of the huge joy and relief when a missing cat is returned home thanks to the details of their chip.”

Battersea’s deputy chief executive Peter Laurie said: “We see strays being brought to us every day, many of which have clearly been much-loved pets that have perhaps just wandered too far from home.

“Unfortunately we are often unable to trace their previous owners as they have not been microchipped or the details on the chip are not up to date.”