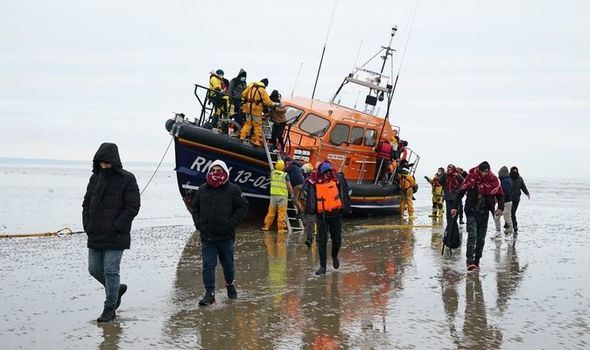 It was estimated around 135 were ready to risk their lives, despite forecasts of bad weather and rough seas. They were rescued by RNLI and Border Force vessels as they headed for Dover and Dungeness on the Kent coast.

The arrivals come three weeks after 27 people died trying to cross when their inflatable dinghy sank off Calais on November 24.

It was the worst loss of life seen in the Channel since the migrant crisis began. Dan O’Mahoney, the clandestine channel threat commander, said: “Unbelievably, gangs continue to ply their deadly trade with more crossings, shamelessly putting lives at risk.”

One man was seen carrying a sleeping child over his shoulder as they disembarked.

A woman, exhausted and relieved, made a V for victory sign as she set foot on dry land.

Many were draped in navy blankets and wore thick winter coats and woolly hats.

One man was seen carrying a sleeping child over his shoulder as they disembarked.

Some were seen tapping away on mobile phones as they headed towards immigration officials.