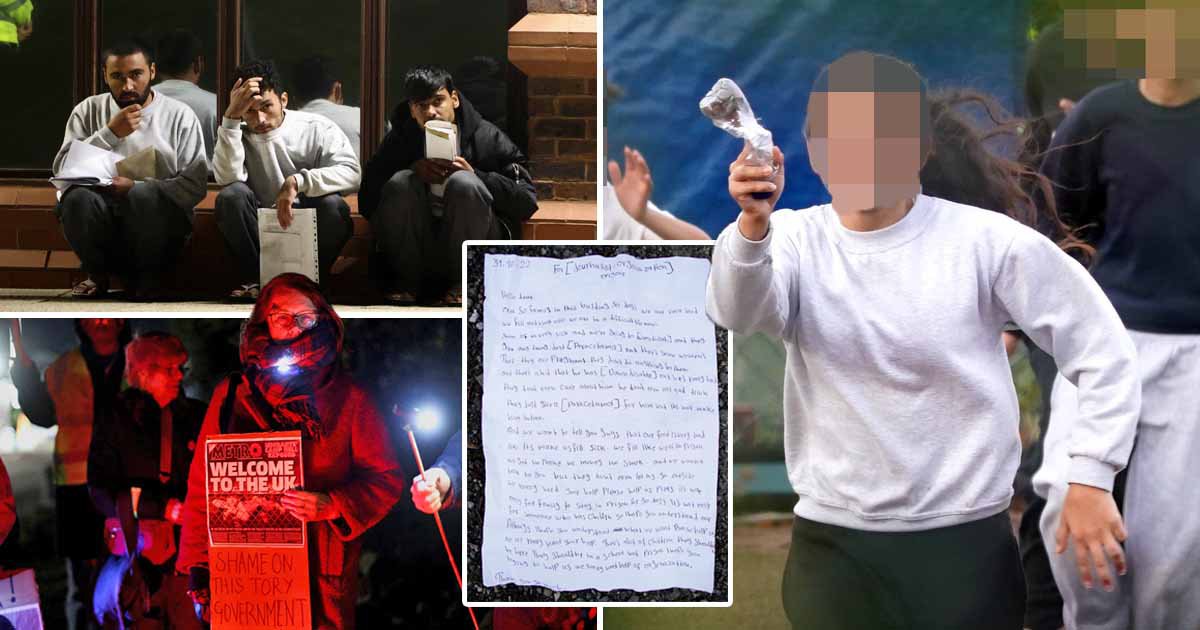 A young girl detained at Manston has begged for help via a message thrown thrown to journalists over barbed wires.

Her handwritten letter describes the conditions at the so-called processing centre in Kent as a ‘prison’ where food ‘makes people feel sick’, and claimed there were pregnant women and ill detainees there.

Written in broken English and addressed to ‘journalists, organisations, everyone’, it appeared to suggest at least 50 families had been held at the facility for more than a month.

The girl wrote: ‘We are in a difficult life now… we fill like we’re in prison. Some of us very sick… ther’s some women’s that are pregnant they don’t do anything for them. We really need your help. Please help us.’

Her letter claims there is a disabled child at the site, adding: ‘He’s really bad, they don’t even care about him. It’s not easy for someone who has children…

‘There’s a lot of children they shouldn’t be here. They should be in a school not prison.’

Her plea comes as pressure is mounting on the government, and specifically the home secretary, Suella Braverman, over their handling of the Channel catastrophe.

Earlier this week, hundreds of people are thought to have been moved out of the disused RAF base amid concerns of overcrowding.

The Home Office is now facing a judicial review over the conditions at the centre, the immigration minister has told Sky News.

Robert Jenrick stressed this is not ‘unusual’, adding: ‘I believe we have received the initial contact for a judicial review.

‘This is a highly litigious area of policy but of course, as the minister responsible I want to make sure everything we do is conducted appropriately and within the law.’

Protests have also broken out outside the centre over the ‘dire’ conditions at Manston.

Further reports from the Guardian revealed the Home Office abandoned a bus full of asylum seekers in central London without accommodation or warm clothing, as officials attempted to reduce acute overcrowding.

Volunteers with the Under One Sky homelessness charity said 11 people from the facility were left at Victoria railway station on Tuesday evening with nowhere to stay, without winter coats and many of them in flip-flops.

‘They were stressed, disturbed and completely disoriented,’ said Danial Abbas, a volunteer with the charity.

Manston is designed for 1,000 people or so to stay for very short periods of time while undergoing security, identity and health checks.

But according to Diana Johnson MP, chair of the Home Affairs Committee, 4,000 are currently held there.

The situation at the facility had been branded a ‘breach of humane conditions’.

In a letter to Ms Braverman today, she wrote: ‘We are deeply concerned that 96% of the asylum claims from 2021 have not been completed and individuals are still awaiting decisions.

‘Only 4% of those who arrived by boat in 2021 have had a decision on their claim.

‘The Home Office “work in progress” caseload stands at 166,085, which is nearly double the figure in June 2020 and a significant increase since June 2021.’

The leaders of 14 authorities including Kent County Council and Medway have called on the government to stop using the county as an ‘easy fix for what is a national, strategic issue’.

In a letter to Ms Braverman, they said the situation at Manston is ‘critical’.

It read: ‘We now have approaching 4,000 service users contained within segregated marquees as we approach the coldest months of the year, some having been on roll mats for over a month.’

There are also ‘reports of tensions growing and concern about the potential for disorder’.

As the facilities become ‘more high profile’, incidents of far-right activity continue to grow as these sites become a focus for local, regional and national attention, the council chiefs said.

Their comments come after Andrew Leak, from High Wycombe, threw homemade petrol bombs at an immigration centre in Dover.

A spokesperson for the Home Office said Manston remains ‘resourced and equipped to process migrants securely’.

‘We will provide alternative accommodation as soon as possible,’ they added.

‘We urge anyone who is thinking about leaving a safe country and risking their lives at the hands of vile people smugglers to seriously reconsider.

‘Despite what they have been told, they will not be allowed to start a new life here.’

The department said it provides for all the basic needs of migrants arriving in the UK, their safety and those of its staff are its utmost priority and it is committed to protecting their welfare.