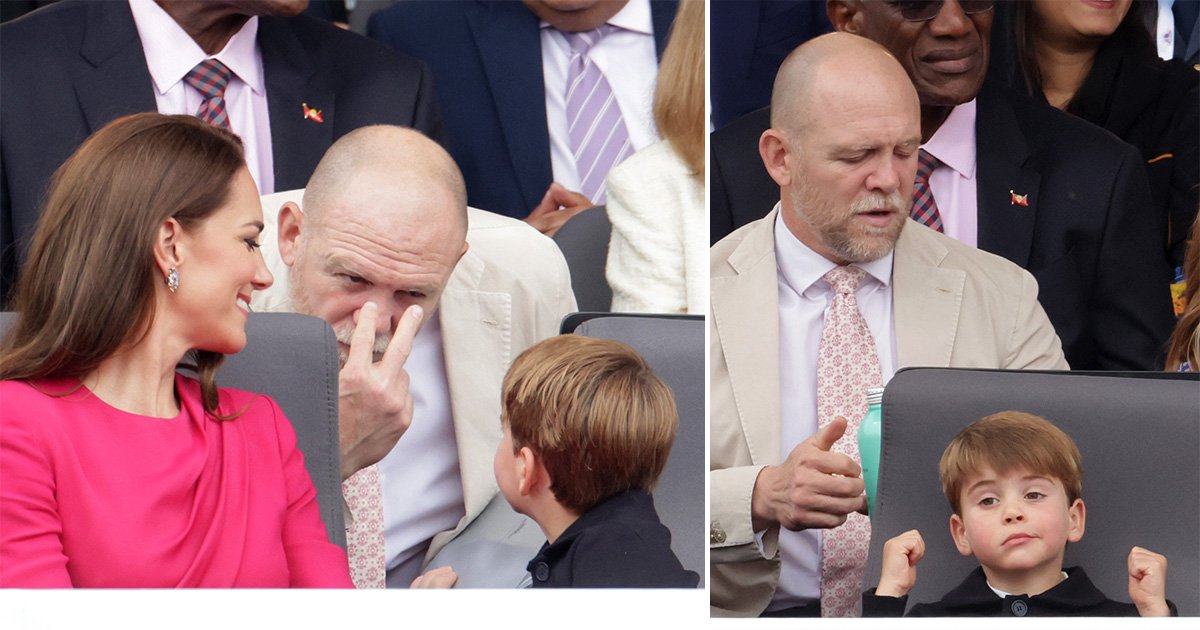 Mike Tindall was seen giving Prince Louis a cheeky ‘warning’ after the young royal started mucking around at the Platinum Jubilee pageant on Sunday.

The former England rugby star, who was sat behind the four-year-old prince, made a gesture mockingly suggesting he had his eyes on him.

Moments earlier, Louis had been spotted throwing a cushion around and wriggling in hsi seat.

Pictures from the across the crowd also showed him excitedly pointing things out in the parade, putting his fingers in his ears and covering his eyes.

His mum, the Duchess of Cambridge, couldn’t help but laugh at the intervention by Mr Tindall, who was sat with his eldest daughter Mia, 8.

His wife Zara, the Queen’s granddaughter, was herself seen mucking around with another young royal at Saturday night’s ‘Platinum Party’ in Buckingham Palace.

She was pictured leaning across the back of Princess Charlotte’s seat to poke elder brother George in the ear with a Union Jack flag.

Kate, who was sat next to the pair, found the tender moment equally amusing.

Zara was due to make an appearance at Sunday’s pageant but was not sat with her daughter and husband, who was instead flanked by Boris Johnson.

Mr Tindall and the prime minister appeared to share some banter of their own, with pictures showing the pair cracking up as they chatted in the build-up to the show.

Other royals in the box included Prince Charles, Camilla and Princess Anne, who was due to be joined by her son Peter Phillips.

Princesses Beatrice and Eugenie also made an appearance, although they were not joined by their father Andrew, who allegedly tested positive for Covid two days before the event.

Dust off your Union Jack bunting, Queen Elizabeth II’s Platinum Jubilee is well and truly upon us.

Visit Metro.co.uk’s Platinum Jubilee page for all the latest updates.