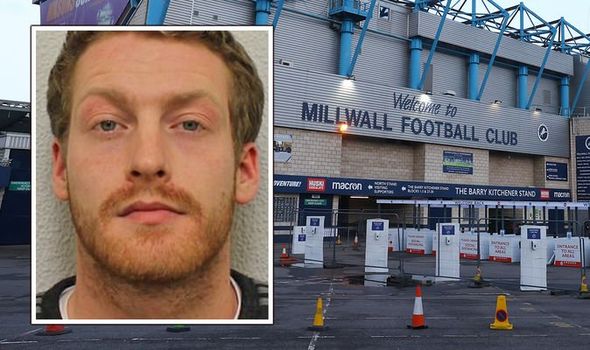 Billy Cowap, 24, left Jay Burns with life-changing injuries after the clash. Met Police bosses described the fight as “some of the most shocking football violence we have seen for some time.”

Police took Everton fans to a nearby housing estate to separate the two groups – but officers were outnumbered and the fight continued in January 2019.

The court saw footage of Millwall fans launching missiles at the away supporters and then the two groups clashing in a street brawl.

Cowap was jailed for six years and eight months for GBH with intent against Jay Burns, an attempted GBH against a second Everton fan Joel Davies, and violent disorder.

Seven other Millwall fans were also sentenced after pleading guilty to violent disorder at earlier hearings.

Prosecutor Alex Agbamu said: “On the 26 January 2019, Millwall were hosting Everton Football Club in the FA Cup third round.

“At about 4pm a group of 200 Everton supporters approached Whelan’s Pub in Rotherhithe Old Road.

“The decision by so many Everton supporters to make this particular journey to the venue appeared designed to provoke the Millwall fans.

“Some of the Millwall supporters who were inside the beer garden responded by throwing missiles back – chairs or parts of chairs or beer glasses.

“Police responded quickly. Officers from the British Transport Police and officers on horses and on foot succeeded in separating the respective groups.

“The supporters of Millwall and some supporters of Everton were not content to let matters stop there. The second phase happened in a housing estate almost exactly across the road from Whelan’s.

“Millwall supporters from other venues close by congregated and formed a group who then set about prolonging the incident.”

The court heard Cowap was seen on CCTV at the Farriers Arms talking on his phone and putting a scarf over his face before heading to where the fight was.

He slashed out at one Everton fan with a knife concealed in his hand, the court heard, with one man managing to escape injury by stepping back.

Another man was not able to avoid the knife and was slashed across the face.

Mr Agbamu said: “Besides the physical effects of the injury, Mr Burns said he was suffering anxiety and depression. He is concerned it has harmed his prospects of employment and when people see his face they are put off and deterred from getting to know him better.

“Mr Davis has also suffered, he says he thinks about what might have happened if he hadn’t stepped back in time when the defendant had the knife in his hand.”

Speaking to the Liverpool Echo after the incident, Mr Burns said: “I just don’t understand why people carry knives to a football match.

“The scar on my face has completely wrecked my life; I can’t even look at my girlfriend properly.”

He claimed Millwall fans sent him abusive messages online, including pictures of Batman villain The Joker from Dark Knight, who has distinctive facial scars.

Speaking of Cowap, Martin McCarthy, defending, said: “This behaviour he finds very difficult to explain. He is a family man, he is devoted to his family and his partner.”

Jailing him, Judge John Lodge said: “Your behaviour in January 2019 was wholly out of proportion to anybody else who I have had to sentence for the shameful events of that day.

“You attended a football match with a knife. You took yourself to the scene of the trouble. You can be seen on the CCTV being at the very front of those who are making trouble slashing out with your knife at somebody who had the good fortune to back away.

“Having failed in that brazen act of violence under the eyes of police officers you took yourself into the mess of the Millwall fans and you slashed at your victim Mr Burns leaving him with a scar which runs and will always run from his eye to the edge of his mouth.

“It is not simply the fact that he carries a scar, it is the fact it has had a lasting impact on his life. His ability to communicate, to go out in public and to obtain employment.”

Two Millwall supporters, Dean West and Alex Jarvis, both 34, were handed suspended prison sentences after a judge heard they have other convictions for football violence.

The court heard police connected Jarvis in the Everton CCTV with a previous incident at a Bristol City match.

In October, eight Everton fans were sentenced for their roles in the brawl, with six receiving three year football banning orders, at Southwark Crown Court.

The match was won 3-2 by Millwall after an injury time winner by defender Murray Wallace.