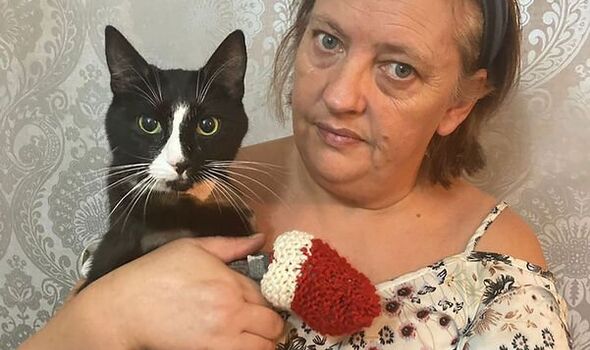 A miracle moggy used up one of her nine lives after surviving a fall of 100 foot from a tower block.

Sox the black and white cat suffered shattered paws in the tumble from a seventh-floor flat in Leeds, West Yorks, on October 24.

Owner Carol Swanson said she had now been stung with a £5,000 vet bill to treat her beloved feline who she said is “one of the family”.

Studies have shown cats are naturally good at falling from height, with felines reaching a terminal velocity of around 60mph compared to humans that reach around 120mph.

Research compiled about 132 cats brought into emergency care for high-rise falls in New York City found that 90 per cent of the moggies survived. One animal suffered just a chipped tooth and damaged lung after falling an incredible 32 stories onto concrete.

Carol, 56, from Burmantolfts, Leeds, said her own cat Sox managed to make his way to the entrance to the flats despite his injuries.

She said the one-year-old had pushed a window open, fallen all the way down and then in agony had dragged himself all the way around to the back of the building – which was a couple of hundred metres away – where he lay waiting for his owners to find him.

Carol said: “I was so upset and terrified when we realised he wasn’t in the flat. I was distraught. Oh my God, I was so relieved when we found him. I thought we’d never get him back, especially alive.

“We’re not poor but we’re not rich people but you’d pay it for anyone in your family and he’s part of the family, so you’d do anything for them. It’s gone better than I thought, to be honest, there are some nice caring people out there.

“Sox coming home has been stressful as he’s got to his cone on and he’s not been sleeping. I haven’t been sleeping for two nights ever since he came home as he won’t keep it on. I’ve had to keep watching him every two minutes.”

Carol’s partner Christopher Noad, 42, who works as a housing officer for Leeds City Council, was the one who discovered him.

He said: “He was just outside the flat doors, waiting to come in. It was a bit of a shock, we weren’t expecting him to be alive.

“I was so happy when I saw him. I just picked him up when I got him straight in. He’s only a year old and from where he’s fallen is quite a distance, how he’s managed to survive and get back around…I mean must have crawled on his belly, or however he’s done it, to get back around to the main doors, sit there and wait. The fact he’s done that, well, wow.”

Carol’s family, daughter Sarah and son who did not want to be named, were all at the flat in a bid to find the cat and rushed him to Holly House Vets in Moortown Corner.

Days later he underwent an operation called a spider external fixation to treat his shattered paws, which involved lacing wires into his paws.

It will be three months until Sox can get the wires removed.

Carol is asking anyone who can help pay towards the surgery to donate money to her Go Fund Me, they’ve set a target of £1,000 to help them towards the payments.

Attention 'snowflakes' and 'me me me millennials': The British Army wants you