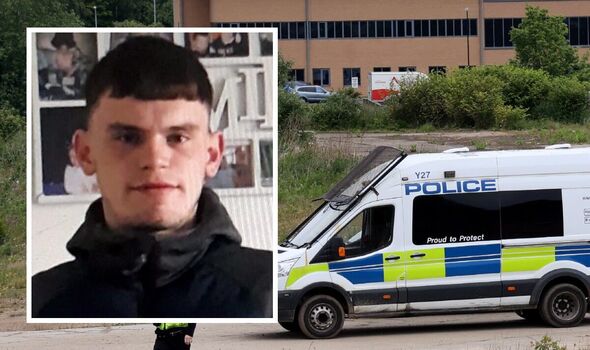 A teenager’s decaying body was found buried in a makeshift grave in Sunderland with 20 stab wounds more than six weeks after going missing, a court trial has heard. Two of the teen’s friends are being tried by a jury but deny the murder.

Newcastle Crown Court has heard that on May 31 a grave, concealed with sticks, leaves, litter, and branches, was found with Kieran’s body inside it.

The burial site was in a secluded, wooded area at a former industrial estate near the Northern Spire bridge in Sunderland.

Prosecutors allege his friends Ben Cook, 19, and Louis Hackett, 20, murdered the teen in a “prolonged and sustained attack” before burying him at the estate near the River Wear.

David Lamb KC alleges Mr Williams was killed as part of a “planned attack” by Cook and Hackett who were “in it together”.

He claims the friends had been in touch with Mr Williams before he walked to his soon-to-be burial ground.

He also alleges the pair tried to cover their tracks by texting Mr Williams after he had been killed.

According to Mr Lamb, Hackett texted Williams the following message: “are you taking the p***, where are you, waiting about like a daft ****”, then added ‘f*** ya, don’t speak to me again”.

Cook also sent Williams a Facebook message asking “you back yet mate”.

The alleged killers also visited the burial site just days after the murder, the jury were told.

Williams, whose corpse was examined by a pathologist, suffered 20 stab wounds to his chest, torso, neck and had injured his hands, arms, and legs – possibly while trying to protect himself.

Mr Lamb told the court: “In his professional opinion, death occurred in the course of a prolonged and sustained attack, given the number of injuries and their locations.”

The attack left him with damage to his aorta, a vital artery that moves blood from your heart to your lungs, his liver and spine.

The friends had even allegedly attempted to set the teen’s body on fire while he was in the grave – shown by fire damage to his clothes.

“The fire expert’s view is Kieran’s body had been set fire to in the grave itself,” said Mr Lamb.

A shovel, fork and spade were also found near the burial spade and there were spade marks in the soil around the grave.

Further evidence of planned approach is that the average make-shift “clandestine” grave is around 0.4metres – less deep than the 0.75 metre deep grave where Williams was found, according to a forensic archaeologist.

Mr Lamb told jurors: “The significance of that fact is the grave did not resemble a hurriedly dug or hurriedly constructed grave or hole in the ground.

“She [the archaeologist] cannot say with certainty the grave was dug before Kieran Williams was killed.

“Her findings, together with the location of the grave may indicate a degree of pre-planning, in view of the fact it was near several accessories, in a secluded area, surrounded by trees.”

The two suspects were initially arrested on suspicion of kidnapping but turned on eachother with accusations of murder after fingerprints were found on the site.

Queen abdication: The UNSPOKEN tradition of one European monarchy