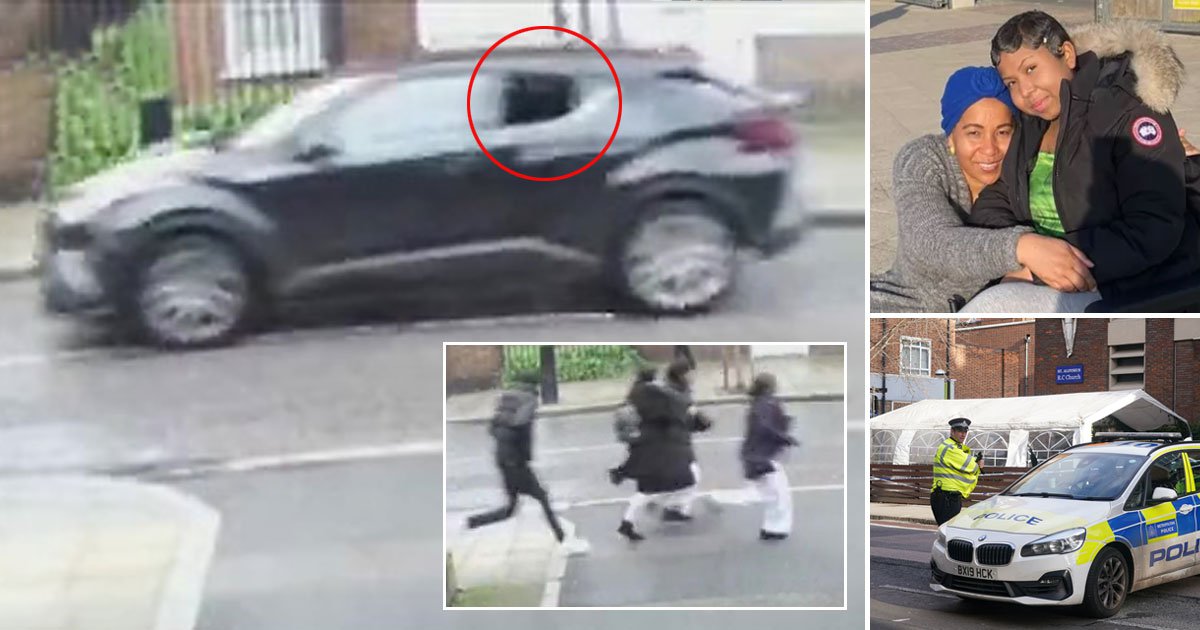 The horrifying moment a gunman opened fire outside of a church in north London injuring a seven-year-old girl has been caught on CCTV.

Video footage from outside of the St Aloysius Church in Euston, shows a black Toyota car pull up before gunshots ring out followed by the screams of witnesses.

In the CCTV dozens of mourners and passers-by who heard the loud bang and possibly saw what happened started to run away from the scene.

One woman can be heard screaming ‘oh my god’ after the shotgun pellets were fired.

Further video from inside the church shows those inside creaming and running for safety back inside the church, with one person shouting, ‘we need to get out’ while another said, ‘get to the back’.

Others were heard crying, some shouting, and others being told to ‘sit down’.

‘There’s speculation that it was some sort of revenge attack.’

Last night police arrested a 22-year-old man on suspicion of attempted murder, after a car was stopped in Cricklewood Lane, Barnet, shortly before 4pm on Sunday.

The attack was said to have happened outside a Requiem Mass for Sara Sanchez, 20, and her mother, who both died in November.

Around 300 people were leaving the mass for Sara, who died of leukaemia in November, and her Colombian mum Fresia Calderon, 50, who suffered a fatal blood clot three weeks earlier.

Appealing for information, Supt Jack Rowlands said: ‘People came to attend a funeral, to be with friends and loved ones and mourn together. Instead, they were victims of a senseless act of violence.’

He said Metropolitan police officers were hunting a black Toyota C-HR – likely to be a 2019 model or similar – which the gunman and at least one other person were in before it sped off.

Extra officers have been deployed on the streets of Camden since the shooting, just before 1.30pm on Saturday.

A police source told The Mail on Sunday a man jumped out of the car and started firing into the crowd as white doves – symbols of peace – were released.

It is thought the gunman did not target the women but was trying to kill someone else.

A woman mourner, who asked not to be named, told The Mail On Sunday: ‘People are saying the intended target was a man at the service. There’s speculation it was some sort of revenge attack.’

Father Jeremy Trood, who conducted the service, said: ‘I heard the bang and people ran back into the church. They knew something had happened outside. They were very scared, people sheltered in the church until the police said they can leave but some were so scared they had to wait a while to get their confidence back to go.’

When emergency services arrived at the scene, they found the victims suffering bullet wounds on a small side street near Euston station.

The 12-year-old girl was hit in the leg and has been discharged from hospital. The seven-year-old was in a ‘stable but life-threatening condition’ last night.

Anyone who witnessed the shooting incident or who has information about what took place is asked to call 101, giving the reference 3357/14JAN, and information can also be provided to Crimestoppers, anonymously, on 0800 555 111.