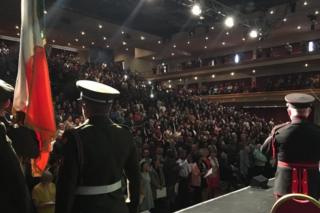 The number of British nationals applying for Irish citizenship has risen significantly since the Brexit referendum almost three years ago.

Irish citizenship ceremonies were first introduced in 2011, and for the first four years applications from Britons averaged about 60 a year.

The upward trend appears to be continuing this year.

More than 600 applications had been received by the end of May. That figure is expected to rise during the latter half of 2019.

The figures mirror the flood of applications for Irish passports.

In the year before the Brexit vote, there were more than 46,000 applications from Great Britain, but last year that more than doubled to over 98,500.

The current minimum waiting time for a first-time passport application from Great Britain is 72 working days – nearly three and a half months.

Irish citizenship can be acquired in a number of ways – through place of birth; Irish descent; marriage, adoption or naturalisation (the length of time an applicant has been resident in Ireland).

Citizenship is automatic for many people, such as those born on the island of Ireland before 2005 or those with a parent who is an Irish-born citizen.

Others must apply to the Department of Justice for citizenship.

While attending the most recent citizenship ceremony in April, Irish Justice Minister Charlie Flanagan remarked on the “significant numbers” of applicants originating from the UK.

Just over 300 British nationals were among the 2,400 new Irish citizens congratulated by the minister.

BBC News NI asked the department if it was linking the recent rise in British applications to the UK’s decision to leave the EU.

A department spokesman agreed the figures showed an increasing pattern since the referendum in June 2016.

“It is reasonable to attribute this steady rise in applications from British nationals over the last three years to concerns around the outcome of the Brexit process,” the spokesman added.

Both women have a similar story to tell.

Both have lived in the Republic of Ireland for decades, retaining their British passports and identity. But fears over Brexit prompted them to seek Irish citizenship.

British nationals are the second biggest group of non-Irish residents in the Republic of Ireland.

The most recent Irish census, carried out in April 2016, found there were just over 103,000 residents who described themselves as British.

In immigration terms, they were outnumbered only by Polish citizens who totalled more than 122,500 in April 2016.

Up until the year after Brexit, British nationals made up just a tiny minority of those seeking a declaration of Irish citizenship.

In 2012 for example, the Dublin government issued more than 25,000 certificates of Irish nationality to people from around the world, but just 85 of those documents (0.3%) were granted to Britons.

But between 2016 and 2017, the number of successful British applicants rocketed by more than 400%, increasing from 98 certificate recipients to 526.

Certificates of Irish citizenship in numbers

So far this year, the Irish Department of Justice has issued 312 certificates of Irish nationality to British applicants, and we’re not yet half way through 2019.

It used to be the case that anyone born on the island of Ireland, including Northern Ireland, was automatically entitled to Irish citizenship and therefore EU citizenship.

The 1998 Good Friday Agreement, an international peace treaty, gave those from Northern Ireland the right to identify as Irish or British or both.

But by 2004, the Irish government said the law was being exploited by “citizenship tourism”, claiming that foreign women were travelling to Ireland in late pregnancy in order to get an EU passport for their babies.

It called a referendum, in which Irish voters overwhelmingly backed the tightening of the rules, with 79% voting to end the automatic citizenship right for all babies born in Ireland.

People who do not qualify automatically for Irish citizenship but are still entitled to apply:

Emily Thornberry blasted for ‘illogical’ Brexit policy – ‘Get deal, campaign to REJECT it’

Bloody Sunday: How tensions in Derry erupted into violence