Parents carrying toddlers were among the latest batch to make the treacherous 21-mile journey by small boats from France. 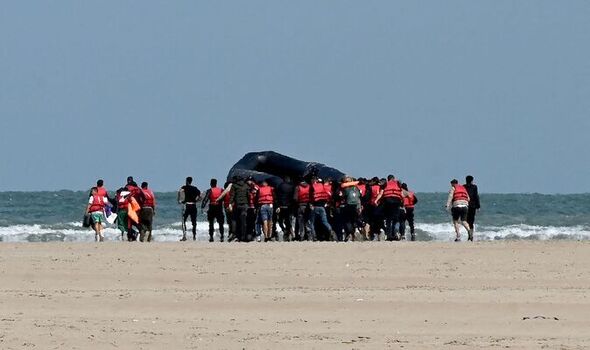 The number of people detained by Border Force officers this year is now 25,043 – a figure not reached last year until November 2021 when the total was 25,792.

Calm conditions at sea saw 915 make the voyage across the busiest shipping lanes in the world in 19 people smuggling incidents on Saturday alone.

Saturday’s figures take the total to arrive so far in August to 8,644 in 189 – the most detained in a single month ever crossing the channel in small boats.

Men, women and children were brought into the harbour at Dover, Kent on Saturday.

Parents were seen carrying toddlers off Border Force vessels up the gangway to have their immigration status processed.

One man in his 20s appeared to give the sign of an Albanian spread eagle to onlookers as he came ashore.

A number of families with small children were also escorted up to the processing centre. The Dungeness lifeboat also landed around 40 migrants on the beach at Dungeness, Kent.

Strong winds in the Channel yesterday are expected to last into the week preventing further crossings for the time being.

Natalie Elphicke, Conservative MP for Dover believes the French authorities should be doing more to stem the tide of immigrants in Britain.

She said: “France has a moral and international obligation to protect vulnerable people, save lives, stop people smugglers and tackle organised crime. They should not need to be paid to do their duty.

“It is even more ridiculous that we pay them tens of millions of pounds and get so little in return. This is a shocking waste of taxpayers’ hard-earned money.  Sorting out the small boats crisis must be a key priority of the next Prime Minister.”

Matt Hancock refuses to say if Christmas relaxations could be scrapped

Royal POLL: Should Meghan and Harry be banned from balcony for Queen’s jubilee?