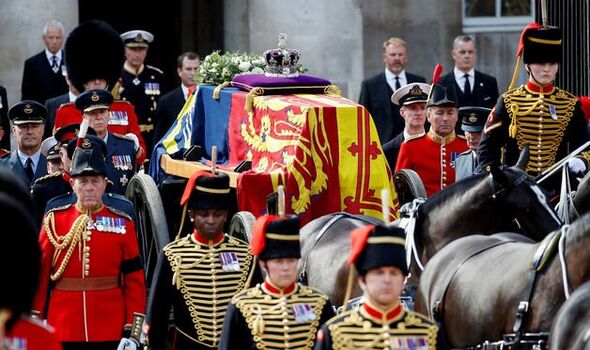 As 500 heads of state, special dignitaries or political leaders from all over the globe prepare to fly to the UK for the State Funeral, TV experts predicted the huge audience.

Carolina Beltramo, analyst at WatchTVAbroad.com, said: “Such is the love and admiration for Queen Elizabeth II around the world that her funeral is destined to be the biggest live TV event in history.”

“No fewer than 4.1billion people are expected to tune in on Monday to witness this historic moment as half the people on planet Earth pause to pay their respects. Thanks to advances in technology, which mean most of us now carry TVs around in our pockets, audience figures will eclipse the opening ceremony of the Atlanta Olympics, when 3.6billion people saw Muhammad Ali light the Olympic torch in 1996.”

She added: “In contrast, an estimated 2.5billion people watched the service for Diana, Princess of Wales, 25 years ago, with 31million Brits tuning in. This was then a UK record for a live TV event.”

Britain’s major news broadcasters have announced uninterrupted coverage of the Queen’s Funeral, though full schedules are yet to be drawn up.

With the duties of the day beginning at 6.30am, the main service at Westminster Abbey will then take place at 11am. A committal service will later be held at St George’s Chapel in Windsor, which will also be televised. It will be broadcast live so the public can witness the entire historical event.

A decision over BBC guests and presenters has yet to be finalised, but the coverage is expected to be anchored by Huw Edwards.

ITV said it will broadcast the entire event at Westminster Abbey i. what will be the largest outside broadcast in ITV’s history.

The funeral will be shown live and uninterrupted on ITV’s main channel and simultaneously on all of its digital channels.

The coverage will be preceded by Good Morning Britain which will preview the funeral.

Moving into the evening, ITV will then broadcast a documentary film chronicling the events of the past 10 days from Her Majesty The Queen’s death to the state funeral.

There will also be a special programme focusing on the day’s events at 9pm followed by an extended News at Ten.

All of the day’s programming from 6am to midnight will be simulcast on all of ITV’s main channel and five digital channels and hub – the first time in its history ITV has done so.

Anchors and guests have yet to be finalised, the channel said.

Sky News will also broadcast the funeral live from start to finish and will have rolling coverage from 6am, with anchors expected to include Kay Burleigh and Jayne Secker, as well as Royal expert Alastair Bruce.

Dominic Cummings has up to £50,000 unpaid council tax bill 'written off'