Home » Europe » Moscow Is Holding Elections for City Council. But Will It Be a Fair Competition?

MOSCOW — Moscow is preparing to hold elections for City Council this fall, but the most prominent opposition politicians say they may not get a chance to run.

To compete in the elections in September, candidates not endorsed by a political party are required to collect about 5,000 signatures, depending on the size of their district.

Election officials began checking signatures last week, and have so far registered 187 candidates, all of whom are largely supportive of President Vladimir V. Putin.

But officials have not approved the signatures gathered by the three most well-known opposition figures — Ilya Yashin, a street activist; Lyubov E. Sobol, a lawyer and ally of the opposition leader Aleksei A. Navalny; and Dmitri G. Gudkov, who until he lost his seat was the last vocal opponent of Mr. Putin in Russia’s national Parliament.

The officials have refused to register Mr. Yashin and say they may not register the other two. All three candidates are young, charismatic and well liked in their districts.

The government, Mr. Gudkov said, was blocking signatures because “they are afraid we will win” if allowed on the ballot.

In Russia, as in many countries that political scientists see as authoritarian, officials regularly hold national and local elections that are not considered free or fair. Still, they call the elections because it is a way to bestow legitimacy on government, even if the election was not competitive.

“Even pretty repressive dictators claim to be democratic,” Daniel Treisman, a professor of political science at the Los Angeles campus of the University of California, said in a telephone interview. Holding an election while barring opposition figures “doesn’t delegitimize the election as much as it might seem,” he said.

Russia has a skein of complicated laws on registering candidates and parties that on the surface appear to protect the integrity of elections.

But the opposition candidates for Moscow’s City Council say these laws instead pose a barrier to getting on the ballot, and explain how elections in Russia come and go with clockwork precision without ever really posing a challenge for Mr. Putin. 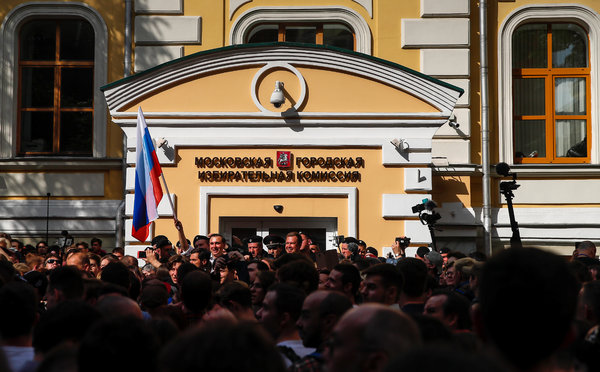 Valentin Gorbunov, the chairman of the Moscow city election committee, told the Interfax news agency that some signatures for the City Council candidates were disqualified because the names and other details matched those of dead people.

Other officials said they ruled out other signatures because they belonged to residents of distant towns or to people with no record at all in the police archives, an almost unheard-of situation as every Russian is required to register a home address with the police.

Supporters of the three candidates whose signatures were excluded have taken to posting notes on Facebook, suggesting people with these names are at the least still alive.

Mr. Gudkov, in an interview, said he had collected statements from more than 100 supporters asserting their signatures are genuine.

Ms. Sobol, the lawyer and ally of Mr. Navalny, filmed a video inside the election office as a dozen or so bureaucrats meticulously checked addresses and signatures on an election petition.

One handwriting expert had a magnifying glass handy.

“This system works for the preservation of itself, and not for anybody else,” Mr. Yashin said.

Activists associated with Ms. Sobol’s campaign in late June photographed unknown individuals paying 1,000 rubles, or about $16, to sign petitions for any or all of her three main competitors.

A Russian news outlet linked to the Internet Research Agency, the organization that United States officials say posted on social media to influence the 2016 presidential election in the United States, has been sharply critical of the opposition figures in the local Moscow election.

It reported on the signatures that were denied on the argument that they were of dead people, writing of one signatory, “his relatives were in shock after learning that Anatoly Fyodorovich is taking part in elections from the other world.”

Small protests to the election process have broken out. The police briefly detained Ms. Sobol and Mr. Yashin at a street demonstration on Sunday.

Mr. Yashin said Monday that he would appeal his formal exclusion.

“If he is confident, why isn’t he letting these people on the ballot?” a former United States ambassador to Russia, Michael McFaul, wrote on Twitter about Mr. Putin. “Maybe he is not as popular and loved as much as we think?”

‘Justice for Mona Wang’ protests planned for Alberta and B.C.

NHS birthday 2020: How old is the NHS? When was the NHS founded?