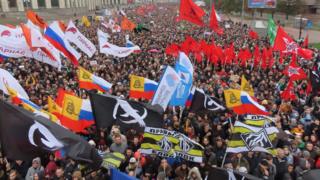 Thousands of Russians have held a rally in Moscow demanding the release of jailed protesters.

Authorities detained more than 1,000 people in July for demonstrating against the exclusion of opposition candidates from a local election.

But heavy sentences for some of those arrested have sparked a rare outcry.

Courts have seemed to back off in recent weeks, dropping charges against some and releasing one man on bail. But demonstrators are demanding all protesters be set free.

What happened in Moscow?

Organisers scheduled the rally – which was authorised by Moscow’s mayor – to start at 15:00 local time (12:30 GMT) on Sakharov Avenue.

Demonstrators flew banners and held posters showing the faces of some of the jailed protesters, while chanting: “Let them go.”

“We have to keep demanding to respect our rights, because they have left us no choice but to protest in the streets,” Ms Sobol reportedly said.

Mr Navalny was one of the last to speak from the stage. He condemned police violence and urged people to come to more rallies in the future.

Privately run news agency Interfax said there were no arrests at the rally.

“Police officers and representatives of the Russian National Guard are ensuring public order and the safety of citizens,” the press service for Moscow police said as the rally began.

In July, independent and opposition candidates were barred from Moscow city council elections scheduled for 8 September on a technicality.

Authorities said they had not gathered enough valid signatures to stand – something the candidates denied.

Tens of thousands protested the exclusion on the streets, in what were the biggest protests in Russia for years.

Security forces used batons and mass arrests to suppress the rallies, saying the demonstrators were breaking the law for attending the illegal events. 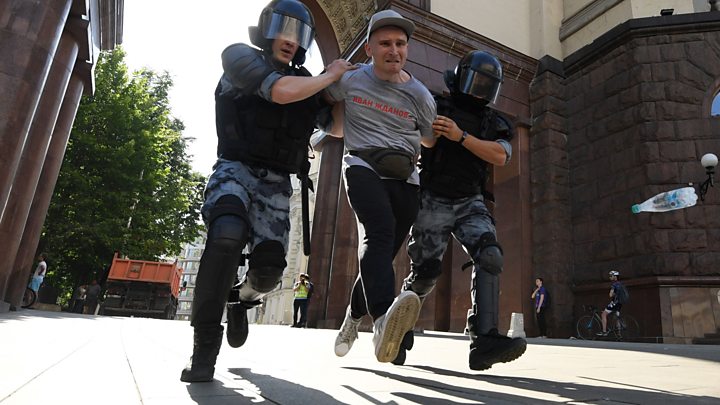 United Russia went on to lose a third of its seats on the city council.

Authorities have since been forced backed down after an outcry over their heavy-handed response to the protests, which saw some protesters receive sentences of up to four years in prison.

For instance, 23-year-old actor Pavel Ustinov received a three-and-a-half-year sentence for wounding a police officer after the July rallies.

Mr Ustinov however said he had nothing to do with the protest and was in fact on his way to meet a friend when he was tackled by officers. He has since been released pending an appeal after a backlash from teachers, IT specialists, actors and Orthodox priests.