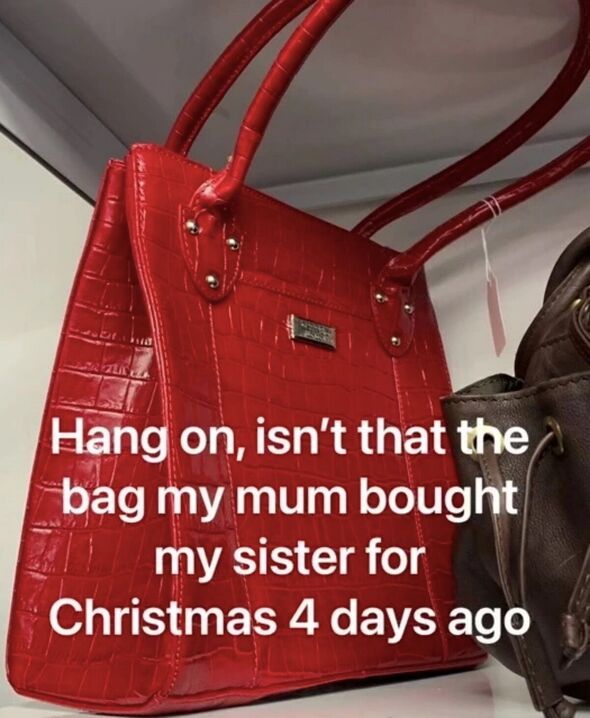 A mother discovered a gift she had purchased for her daughter in a local charity shop just days after giving it to her, as shown in a video that has now gone viral. The red crocodile-effect shoulder bag was found in the local Sue Ryder charity shop four days after Christmas.

The experience was captured in a video on TikTok by Ellie Clarkson, who had been out shopping with her mother when they discovered the gift her mother had given her sister.

Ms Clarkson, who posts from the account @ellieclarkson3, regularly shares life updates via her TikTok account, including day trips to Nottingham, holidays abroad to locations like Brussels and Bali, and visits to festivals.

The latest video was captioned, “Today me and my mum went charity shopping and saw this lovely red bag…”

“Hang on, isn’t that the bag my mum bought my sister for Christmas four days ago?”

A day in the life

“So we decided to send her some photos of what she was missing with a little note. “

In the video, we see the pair print off pictures of the bag and put them in an envelope accompanied by the note, “Why don’t you want me?”

Ms Clarkson then anonymously delivers the envelope to her sister’s house, dressed in a green balaclava and running away before anyone could see her.

The TikTok video has amassed over 140 comments, with many users expressing dismay that Ms Clarkson’s sister could donate the bag so quickly.

Some social media users expressed sympathy for the mother, with one saying, “Oh that’s awful. That would hurt my heart if my daughter did that.”

Another stated, “I never had the heart to give up a gift from my mom.”

Others took a more humorous approach saying, “would have bought the bag and left it somewhere in her house without telling her, she would think is cursed.”

Many more social users supported the prank, commenting on how hilarious Ellie and her mother’s revenge was.

Others took a slightly different line, focusing on the bag itself and adding, “that bag is lush, your mum has great taste!”

It looks like TikTok could be in for another instalment in the saga, as the video ends with the cryptic line, “Stay tuned for part 2 where the cursed bag turns up on her doorstep.”

The audience of the video are already eager to see what happens, with one TikTok user commenting, “I’m invested, I need part 2!”