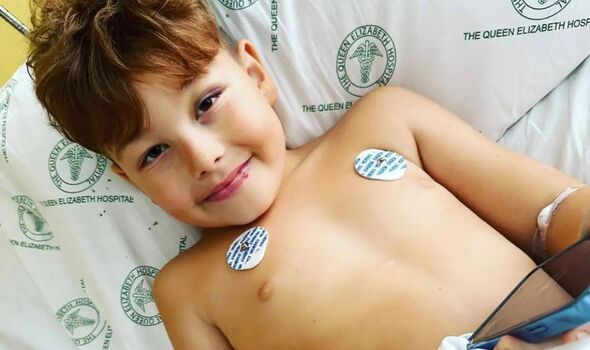 Ace Newcastle, eight, was rushed to the hospital with suspected meningitis following the develpment of a rash. However, he was later diagnosed with acute myeloid leukaemia.

The family, who come from Portsmouth, immediately rushed to raise funds to get him on a medical flight home last Friday, having raised £100,000.

On Sunday, Ace, deteriorated suddenly and suffered a seizure causing a bleed of the brain.

He never regained consciousness and the following day, was placed in an induced coma and declared brain dead.

Ace’s mum, Amber, and his father, David made the decision to turn off life support.

It came after the tragic revelation from doctors that their son had a zero percent chance of recovery.

Hopsital bosses in Barbados stopped medics from turning off the ventilator.

His devastated family are now battling with the government in Barbados for the right to turn his life support off and bring his body home to the UK to be laid to rest.

The law in the Caribbean country states a life support machine can’t be turned off if there’s a heartbeat.

Amber and her partner, Paul, 35, who are by Ace’s bedside in Barbados, must now face court on Wednesday where a judge will decide whether his life support machine can be turned off.

He told The Sun Online: “Ace has not had any treatment for leukaemia because he’s dead, so now the leukaemia is just attacking his body.

“It’s just torture now. His body is covered in bruises.

“My sister has got to sit through that for another four or five days, seeing her son deteriorate when all she wants is for him to be at peace.”

He added: “We just want to bring him home.

“I was so close to Ace. He’s like a son to me. He was a loving, caring, cheeky little boy.”

Joey said the whole family has been left in shock after Ace’s health deteriorated so rapidly.

He said 14 family members flew out to say goodbye to the youngster – before government officials stepped in and stopped doctors from turning off his life support.