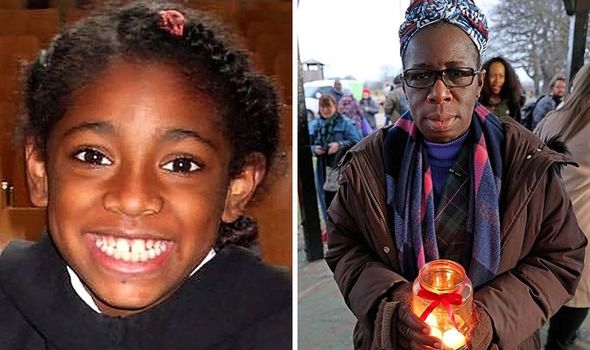 Ella Adoo Kissi-Debrah would have celebrated her 18th birthday today but died aged nine following a severe asthma attack caused by toxic air. The music lover lived near the busy South Circular Road in Lewisham, south-east London, when she died in 2013.

Ella’s teenage twin siblings Robert and Sophia stood beside their mother Rosamund during a candlelit vigil yesterday afternoon in a park near their Lewisham home.

While speaking to 200 supporters clutching candles, including Ella’s classmates, cousins and MPs, Rosamund said: “The fight will go on. As long as children continue to die, I will continue on this journey, with the support of my children.

“I will continue, as long as I have breath in my body, to fight. What do I want? I want clean air to become a human right so that all children everywhere are able [to breathe clean air].

“Childhood should be about love, laughter and playing. This is the playground that Ella used to come to. I will always be heartbroken…but I do hope I will be around to see some change. To think Ella would have been 18, it is unbelievable.”

Rosamund read a verse from the book of Ecclesiastes which followed a reading from Sophia of Thomas Gray’s If I should Die while standing beside Robert under a bandstand in Mountsfield Park.

Addressing the family, Damien Egan, mayor of Lewisham, said: “There is no doubt lives have been saved because of your work.

Rosamund has set up the Ella Roberta Foundation in her daughter’s memory to campaign to end air pollution.

A fundraiser has also been set up to build a statue in the young girl’s memory.

Ella’s mother at the weekend called on the Prime Minister and his staff to stop kids dying because of filthy air.

She said: “The Government is busy going on about ‘Partygate’ but this is something different, this is about people’s health.”

“We’re over the whole party thing. We want them to start doing something about clean air, now!”

“That’s the other reason we wanted to do the vigil ‑ this thing isn’t over and we want the public to show the government that they care deeply about it.”

Prince Louis loss: How Kate’s youngest will lose out on playmate due to Prince Harry