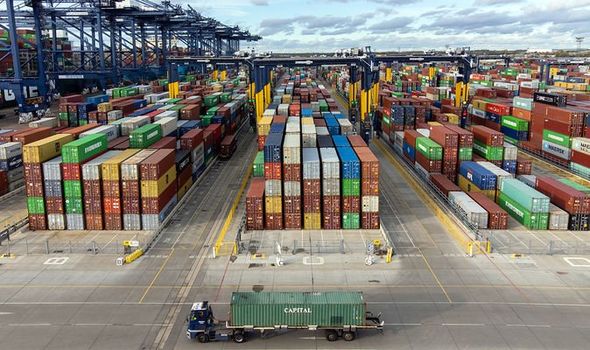 Hundreds of empty steel containers forming a 60-foot-high heap are being stored on a former airfield off the A140 near Eye, just 26 miles from Suffolk’s Port of Felixstowe.

Port authorities said it did not know anything about the steel mountain but shipping companies and hauliers are not required to tell the port about their container arrangements.

“There are insufficient drivers to move empty containers and lots of congestion around the world because of Covid – some ports in China and further afield have been blocked and are just getting back up to speed.

“So it’s like a game of Jenga with lots of moving pieces. What’s happened here is that these containers have got snarled up at Felixstowe.

“Rather than leaving empty containers at the port and letting them clog it up further, what seems to have happened is a deal has been done with the landowner to temporarily store them there.”

Car and commercial vehicle dealer Roy Humphreys confirmed the shipping containers were on its land, and not owned by them, but they did not want to comment further.

Ships were forced to divert from Felixstowe earlier this year because of a lack of drivers and labour shortages which hampered efforts to unload and reload ships.

Industry experts have said some hauliers are finding it cheaper to store empty containers outside ports.

The problems have been worsened by increased demand ahead of Christmas.

On Monday, the world’s biggest freight company Maersk said logistics problems across the global shipping industry would last well into next year.

Maersk boss Lars Mikael Jensen has warned retailers may need to prioritise what they ship to Britain in the coming months due to delays.

He said: “Felixstowe is among the top two or three worst-hit terminals [globally].

“We are having to deviate some of the bigger ships away from Felixstowe and relay some of the smaller ships for the cargo.”