A woman was filmed appearing to cut the queue which takes to Westminster Hall by climbing under two line ropes. The person, however, may have just been returning to her place in the queue after leaving the line for a short break before entering the hall where the Queen lies in state, according to reports.

In the clip, a member of the public appears to get ahead in the queue to pay tribute to the Queen, now lying in state in Westminster Hall.

The video was filmed around 7:30pm on Friday evening, the day King Charles and other members of the Royal family gathered in Westminster Hall to hold a brief vigil beside the Queen’s coffin.

As the queue kept moving, the mourner was seen climbing under a first line rope passing other people already queuing in the line.

A few moments later, the woman is also seen looking around and then ducking under a second airport-style barrier. 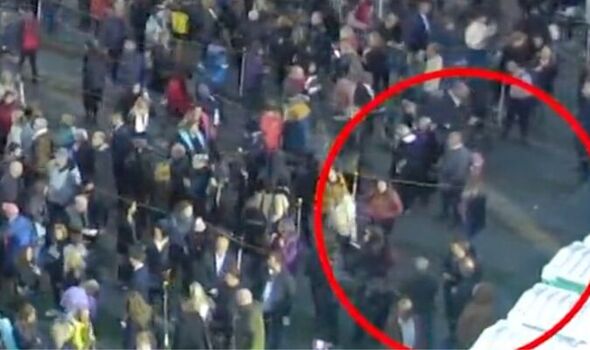 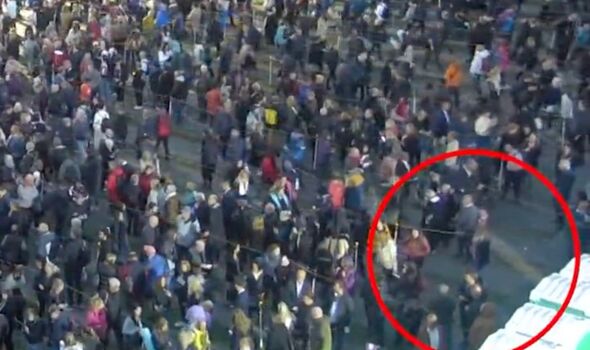 Together with the woman, also a man appears to climb under the first the first line rope.

The woman, however, may have just been returning to their place in the line after leaving for a short break before entering Westminster Hall to pay tribute to the late monarch.

According to official guidance: “When you reach the back of the queue, you will be given a coloured and numbered wristband. This is a record of when you joined the queue, however please note that having a wristband does not guarantee your entry to the Lying-in-State.

“Wristbands are specific to each person joining the queue, and are strictly non-transferable. You must keep this wristband on at all times as it will be checked along the route.

As specified in the guidance, the wristband allows queuing mourners to leave the line for short period of time and then to return their initial place in the queue.

The guidance reads: “Your wristband also allows you to leave the queue for a short period to use a toilet or get refreshments, then return to your place in the queue. Public toilets, drinking water and first aid stations are available at designated locations along the queue route”.

The clip came as King Charles, Princess Anne and Prices Edward and Andrew held a silent Virgil around the Queen’s coffin on Friday evening.

Other members of the Royal Family, including Queen Consort Camilla, watched the vigil from the gallery in Westminster Hall. 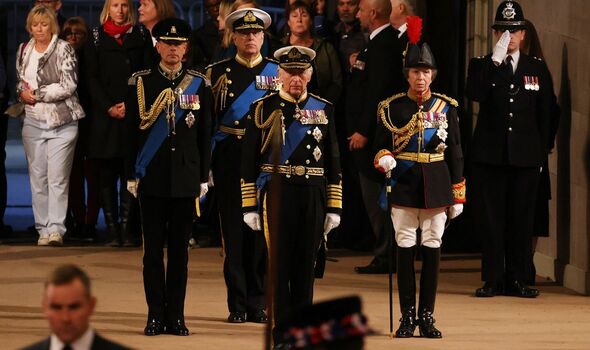 The Queen will lie-in-state in Westminster Hall until the day of the funeral which will take place on Monday morning, 19 September.

The Queen arrived in Westminster Hall on Wednesday afternoon, after a procession which lasted around 40 minutes and started from Buckingham Palace.

Since Wednesday afternoon, members of the public have been able to pay tribute to the Queen 24 hours a day during the lying-in-state.

The Queen’s coffin has ben resting on a raised platform guarded units from the Sovereign’s Bodyguard, the Household Division or Yeoman Warders of the Tower of London.

According to estimates from the UK Government, the line to enter the Hall is now five miles long, stretching to Southwark Park in south-east London.

Thousands of mourners have joined the queue to pay tribute to the late monarch, standing in the line for over 12 hours.