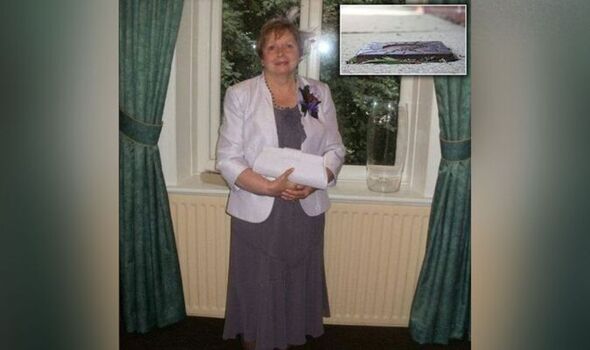 The family of a pensioner who died 18 months after sustaining injuries when she tripped over a raised water grid on the pavement claim they have been unable to convince the council to lower it in a bid to protect others.

Liz Taylor had been on a walk with her husband Arthur during lockdown when she suffered “traumatic brain injuries”.

The 68-year-old’s family say they tried to get the council to act at the time of her fall, but following an inspection they said its height did not meet “investigatory levels” set out in highway safety policies.

The family claim they were told by the council the water main stop cover was just two millimetres short of being too high off the pavement to qualify to be altered under its inspection regulations, reports The M.E.N.

Mrs Taylor, a retired primary school teacher, who was married to Arthur for 46 years, fell on Craiglands in Balderstone, Rochdale, near their home on October 10, 2020.

She returned home but was rushed by ambulance to hospital that night having suffered a “traumatic brain injury”.

Her daughter, Helen Wild, said she had an emergency craniotomy after a CT scan showed bleeding and clots on the surface of her brain, together with “significant brain swelling”.

She said her family were told she might not survive the surgery.

She did, but never fully recovered, and passed away in hospital after being admitted from a nursing home on May 4 this year.

Mrs Wild, 38, has spoken out after a coroner found a link between her death and the fall.

At an inquest held at Rochdale coroners’ court on August 2, area coroner Catherine McKenna recorded a conclusion that Mrs Taylor, who lived on nearby Hurst Meadow, “died from complications which arose following an injury sustained in a fall”, saying she “sustained a traumatic subdural haematoma when she fell whilst walking near her home”.

The family, in a statement to the coroners’ court ahead of the inquest, said she tripped over a water main stop cover “protruding” from the floor.

Mrs Wild, who lives on Broad Lane near her father, said she contacted Rochdale council at the time, then later through a firm of solicitors, but was told that because the metal grid was “two millimetres short of an inch” raised off the ground, nothing could be done.

The mother-of-three said: “Two years ago our lives changed forever.

“If we cannot get it fixed or altered we just want to let people know it is there so it does not happen to anyone else.

“We do not want money. We just want it fixed.

“We want this to be changed because we do not want anyone else to fall in this way.”

The family said they went on to contact councillors and MPs, but were told risk assessments deemed the height of the grid to be within acceptable safety parameters.

Mrs Taylor, a mother-of-one, was a teacher at Deeplish Primary School in Rochdale before she retired.

Together with her husband, a retired engineer, they would walk most days during the national lockdown for exercise and fresh air.

Her husband was walking slightly ahead of her when he heard a thud.

Daughter Mrs Wild said: “This was all linked to the fall. Her speech went and she was virtually paralysed down one side.

“She had no skull on one side of her head so she had to wear a helmet.

“I went to the council with it and they said that it [the grid] was one of theirs and they do risk assessments.

“They said that because it was two millimetres short of an inch, they could not do anything.

“We contacted the council in 2020 after mum’s fall, then via the solicitor in 2021 then the councillors after the inquest.

“It is like someone’s life is not worth a grid being raised. It is still like that now. If I cannot get it fixed at least I can raise awareness.”

Mrs Wild, who has shared her story and called for action on a Facebook post, said her mother, who she said doted on her grandchildren, got up after the fall and went back home, but was rushed to hospital in and out of consciousness later that night after being sick. “I saw her with a bag of peas on her head through the window,” she said.

“A CT scan showed bleeding and clots on the surface of her brain, with significant brain swelling.

“She had surgery at Salford Royal Hospital the following morning at 7am.

“They did not know whether she would survive but she did.

“She had an emergency craniotomy and was managed in intensive care.

“She lived after being taken off a ventilator and she was on end of life care for three weeks – she was a fighter.

“All this was during Covid as well so we could not see her as much as we wanted to. We were told to come in and say our goodbyes, but she lived.”

Mrs Taylor was transferred to a specialist neuro rehabilitation ward at Birch Hill Hospital in Rochdale in December, 2020.

She returned home with carers in May last year but was later moved to a nursing home in Radcliffe, near Bury.

Towards the end of April this year, Mrs Taylor was admitted to Fairfield General Hospital in Bury after she vomited and aspirated.

The family said she remained in hospital for four days before being discharged but was re-admitted two days later, when she failed to respond to oxygen.

She then sadly died, with the medical cause of death given at her inquest as aspiration pneumonia.

“The inquest said that her injury caused her death in May this year,” said Mrs Wild. “We have tried legal action and MPs and councillors, but we can’t get the grid fixed. We don’t want anyone else to suffer as we have done. Not for the sake of a tiny grid.”

A Rochdale Council spokesperson said: “We were very sorry to learn of Mrs Taylor’s death and our thoughts are with her family.

“A claim from the family was investigated and in April 2021 a response rejecting any liability was provided to their legal representatives.

“In June 2021 the council was advised that the claimant’s solicitors were closing their file.

“The council routinely inspects highways and pavements to ensure they comply with safety standards and carries out repairs as and when they are required.”

US claims ‘state immunity’ in employment row with British workers

Extinction Rebellion: Climate protesters plan to use drones to shut down Heathrow Airport for 10 days