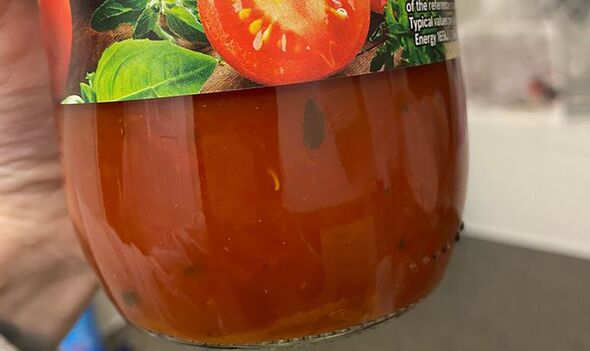 Rosina James poured a small amount of sauce into a pan when she had hoped to cook her family a meal this week. However, she spotted some gruesome foreign objects in the mix, what she believes were dead maggots.

The mum shared on social media photos of the grisly discoveries and wants to warn other families.

Tesco told Dorset Live it is “investigating this as a priority”.

But recalling her disgust, Ms James said: “I saw something, thinking ‘what are those?’

“I’d recently seen pictures of someone who saw maggots in their baked beans and thought it looked a bit similar, I wasn’t too sure. I left the sauce to the side and put it on Facebook asking people what it is.

“I asked Tesco on social media but they didn’t get back to me. I obviously decided not to eat it.”

The mother, who lives in Wareham, Dorset, continued: “They’re dead in the jar, but it really does put you off your food doesn’t it. I’ve asked Tesco to recall it, I don’t want compensation, I’m asking that they make sure no one’s kids eat that.

“We might already be eating this stuff but once we know it’s there let’s not feed it to people.”

Mrs James says Tesco told her that it wouldn’t issue a recall until she could get the jar back into the store, which she can do on Saturday.

Since posting the images on Facebook, Mrs James said another woman reported having the same problem with the foodstuff.

Responding to the claims of the maggots, a Tesco spokesperson said: “We were very sorry to hear this and have been in touch with the customer to apologise. The health and safety of our customers is our number one priority and we are investigating this as a priority with our supplier.

“We have stringent hygiene standards in place for all of our manufacturers and will be in touch with the customer once our investigation is complete.”

A spokesperson for Bournemouth, Christchurch and Poole Council said: “We are investigating a complaint from a customer of Tesco in Yarrow Road, Poole. We will check the complaint and prioritise matters which could cause significant harm to health and will action any breaches of legislation in line with our enforcement policy.”