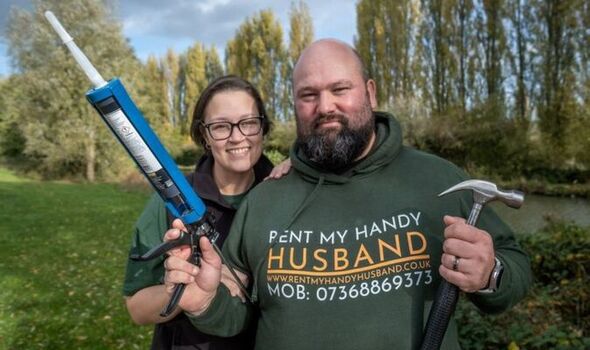 A mother has said business is booming after renting out her husband to do odd jobs for other women. Laura Young, 38, got the idea from a podcast that spoke about a man who was earning a living from building flat pack furniture. The mother-of-three, from Milton Keynes in Buckinghamshire, decided to earn some extra cash by renting her husband out for £40 a time – with him now fully booked for weeks to come.

She advertised on Facebook and the Nextdoor app, boasting of husband James’ general DIY, painting, decorating, tiling and carpet laying skills in June.

Expecting she might get a few giggles, the 42-year-old had his first client in a day, and was soon working six days a week from 9am to 8pm.

He’s been forced to turn down jobs and ‘Rent My Handy Husband’ is now fully booked until mid-November.

Jobs include helping with putting up a TV or curtains to rebuilding a wall, and he is available to hire to anyone who needs help.

While James handles the labour side of things, Laura works on running the social accounts and website.

The business has been more successful than the couple could have imagined, with the pair constantly receiving new enquiries.

The savvy couple have added a new service for the Christmas period, offering installations of festive lights, both inside and outside.

Laura said: “I never expected it to take off as much as it has.

“We’ve only been going four months and it got to a point where there was so much work coming in that James was working six days a week. We’ve had to start turning jobs down and reduce our hours, so now we do Monday to Friday 9am-5pm.

“We had our own building plans that we’ve not even started as we’ve just been so busy. We booked our first job for January too.”

James had to give up his job working in a warehouse to be a full-time carer alongside Laura, looking after their three children, two of which have autism.

The father-of-three was also diagnosed with autism himself four years ago and has always been able to focus on things like building and construction.

Laura said: “He’s really good at building things and doesn’t bother with the instructions. So I thought this would be something he could do. James doesn’t come from a trade background but his grandad was a nuclear engineer, and they think he was also on the spectrum. He’s got a very methodical mind and can think outside the box. He see’s things differently.”

Within days, Laura’s Facebook messages were full of people enquiring about her husband’s handiwork. The couple even had requests for over 150 miles away.

Laura said: “The first customer needed a door frame replacing and then from there I just had people enquiring on the Facebook page. It went from regular flatpack to so much more, like laying a carpet and rebuilding a wall.

“We even had requests as far as Manchester, to which we told them it may be more practical to find someone closer due to the extra costs, but of course we would have done it!”