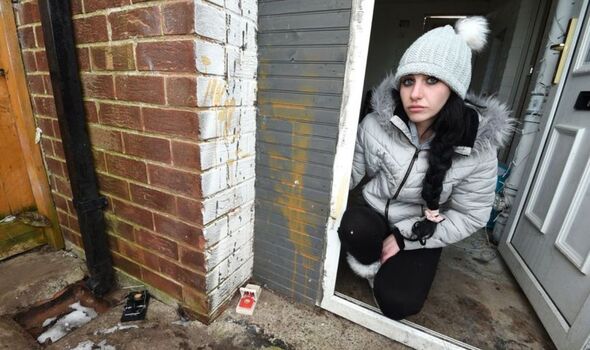 A struggling mum said she has been driven to her wits’ end after a two-year battle with a massive colony of rats which invaded her home. Amy Taggart, 26, said she was left “crying her eyes out” after the rodents chewed through her wiring, defecated in her kitchen and left foul-smelling urine stains on her carpets. She told the Liverpool Echo: “I’ve got a fridge that’s packed with rat poo underneath. I’ve had to throw away a box freezer, my fridge. A load of my wires are chewed around my house, my hoover, my chip pan. My carpet’s got urine stains all over it.

“I’ve caught two different types of rodents in this property, mice and rats. I caught one in a trap about two months ago in my back room, and then the other one I found under the floorboards right next to my bed. I only found it because of the smell. I woke up feeling like I was going to be sick. I lifted my floorboards and there was a dead mouse, and it had obviously been there for a while.

“I went downstairs that same morning and a rat ran across the living room carpet.”

Amy, a single mum of two, moved into the West Kirby home just before lockdown in February 2020 with her sons Lincoln, five, and Lucas, four.

The property, which is owned by social housing company Magenta Living, was allegedly used for hoarding purposes before it was placed on the market in early 2020.

Amy said: “When we moved in I started hearing noises in my loft. They were waking me up. I was scared, it sounded like planks of wood banging on each other.”

She got in touch with Magenta Living, but said she was told it was her responsibility to sort out the problem.

However, the company did eventually send out workers in 2021 to clear out the infested loft.

Amy said: “They pulled a dead beehive out, and they were pulling dead rats out. But they didn’t replace the insulation, which was all infested and old and wet; it was disgusting because rats had been living in it for years. Now this year’s come by and because they failed to do the work they should have done late year, the rats have been back in my loft. Basically it has spread from my loft to my house.”

She said she approached Magenta Living again in late September, and she and her sons were bounced around five different properties while work was carried out.

Magenta Living said that all live pests have now been removed from the home – but Amy disagreed, as she said she continued to find fresh droppings.

She said: “I was crying my eyes out, saying they couldn’t leave me in that property any more, and ever since it’s been hell. They’ve moved us to five different places in total and now they’re moving us back. I’m on my last wits. It was only last week I was starting to question if I was actually mental.

“I’m paying money to live here, I’ve never been a problem and they’ve treated me like this. I feel trapped and I feel like I’m just meant to sit and wait for something bad to happen to my kids. It’s not just damp, it’s rats, mice, rat poo, urine. We shouldn’t have to live like this.”

A Magenta Living spokesman said: “Magenta Living understands Ms Taggart’s concerns and we have supported her by providing short term alternative accommodation whilst our pest control contractor carried out proofing and bating works at her home. Ms Taggart moved back into her home on December 5 after proofing and a three-part riddance programme was completed.

“We believe that no live pests have been found at the property since the October 24 2022 and all traps remain clear with bait levels untouched.

“Despite the proofing and baiting works showing signs of success, Magenta Living recognises that there may still be historic signs of the infestation and we will be providing ongoing support and further checks until we have assurance the property is pest free. A further check is scheduled for this week. We are also working with the neighbouring properties to ensure the issue is addressed holistically. Wirral Council’s Environmental Health Team have reviewed this case and have indicated that they do not need to have any further involvement.”

Meghan Markle co-star’s horror after kissing photo revealed: ‘What the hell is going on!’