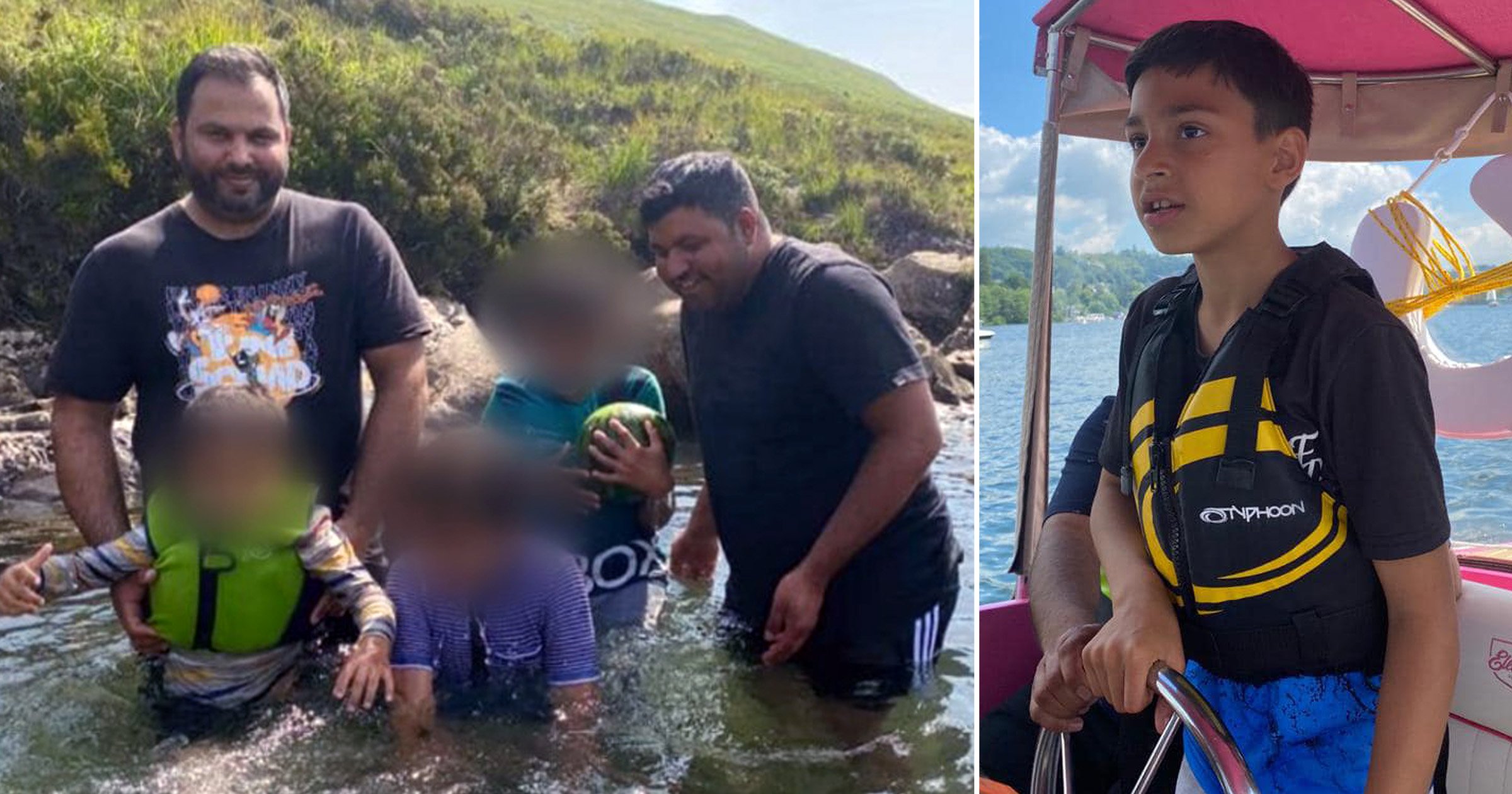 A mother, her nine-year-old son and their family friend have been named locally as the three people who drowned at Loch Lomond.

Edina Olahova, 29, her son Rana Haris Ali, and Muhammad Asim Riaz, 41, died on Saturday evening after getting into difficulty in the water at the Scottish beauty spot, said family friend Saad Sikander Sial on Facebook.

Mr Riaz’s seven-year-old son is also fighting for his life in intensive care at the Royal Hospital for Children in Glasgow, reported Sky News.

Waris Ali, Ms Olahova’s husband and Rana’s dad, was said to have been with them on the families’ outing to Pulpit Rock, south of Ardlui.

Sky News reported a statement on behalf of Rana and Ms Olahova’s family as saying: ‘The family is heartbroken at the death of our charming young boy in what was a tragic drowning accident on Saturday.

Pictures taken just hours before the tragedy show the two families smiling and laughing in the shallow waters of the loch, while Rana is seen being helped by an adult to steer a boat.

Emergency services were called to Pulpit Rock at 6.40pm to reports of people struggling in the water. All three were pronounced dead at the scene.

‘Formal identification has still to take place but the family of a 41-year-old man, 29-year-old woman and nine-year-old boy have been made aware.

‘A seven-year-old boy was taken by ambulance to the Royal Hospital for Children in Glasgow and is currently in intensive care.’

The trio’s deaths were the fourth fatal incident in Scotland’s waters in just over 24 hours, with a total of six people dying in a series of tragic events.

The first death happened on Friday evening, when a 16-year-old boy died after struggling in the water at Balloch Country Park, at the south end of Loch Lomond.

An 11-year-old boy died at the river at Alexander Hamilton Memorial Park in Stonehouse, South Lanarkshire, at 4.30pm on Saturday afternoon.

Just over an hour later, police were called out to Hazelbank in Lanark at 5.55pm, and recovered a body from the water. The family of a 13-year-old boy have been made aware of the incident.

Less than an hour later, police were called out to the tragedy on Loch Lomond, where Ms Olahova, Rana, and Mr Riaz are understood to have died.

Gordon Watson, chief executive of Loch Lomond and The Trossachs National Park Authority, said: ‘First and foremost I want to extend my deepest sympathies to the loved ones of those who have died. I also want to thank all of those involved in the search and recovery operations.

‘This has undoubtedly been one of the worst weekends in the national park’s history.’

Police have urged people to ‘exercise extreme caution’ when swimming in lochs, rivers and the sea during hot temperatures.

Assistant Chief Constable Mark Williams said the number of deaths that had taken place in open waters over the weekend was ‘hard to comprehend’.

He said: ‘The warm weather can make open water swimming and paddling very inviting but it is extremely dangerous, even for the most experienced swimmers or supervised children. The conditions can change very quickly and there are often hidden risks like deeper water and strong currents.

‘The message I want to send to everyone is exercise extreme caution. It is better to keep a safe distance from water if possible.

‘Tragically, this weekend has highlighted that open water is very, very dangerous.’

He urged people: ‘If you see someone in the water and distressed, call 999 immediately.

‘Remember, you could get into difficulty yourself trying to help so please take care and seek help as soon as possible.’