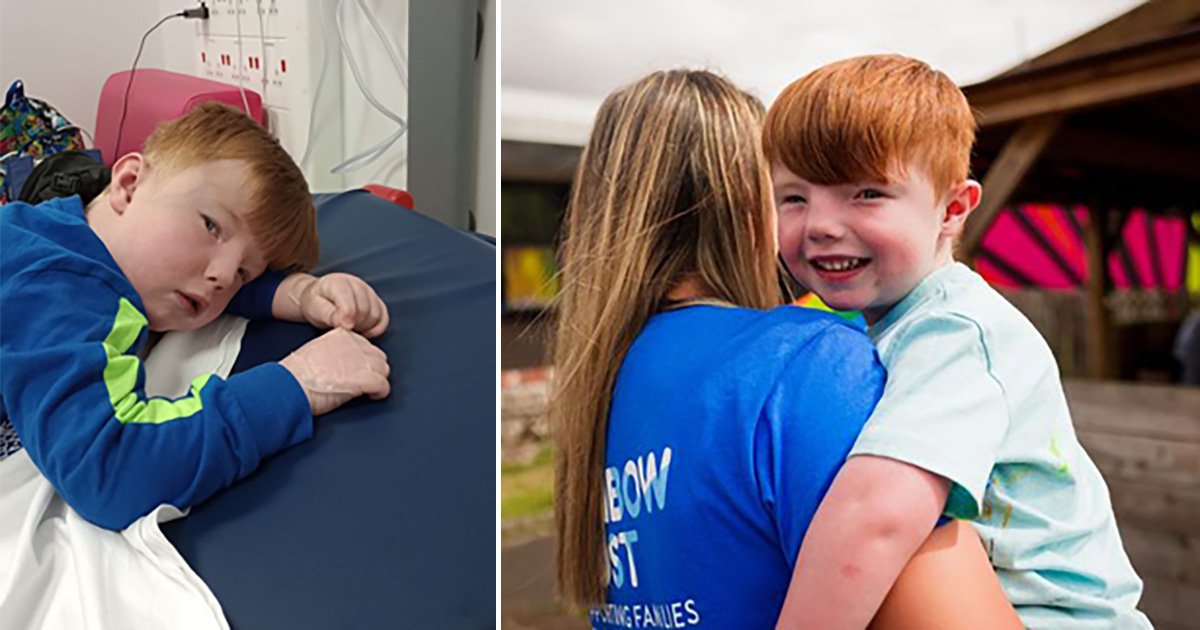 The scale of Britain’s living cost crisis has been highlighted by a devastated London mum – who is struggling to afford a coffin for her terminally ill son.

Donna Brady, 38, was told during her pregnancy that son Romeo ‘wouldn’t see his first birthday’.

She was told to ‘prepare for the worst’ due to his serious heart condition.

Romeo is now four and has defied the odds he was granted at birth.

But Donna is struggling to afford to trips to hospital and energy bills in the face of the living cost crisis, and relies on charity support for special days out.

‘But I’m living on my nerves and my anxiety 24 hours a day, because I don’t know if I’m going to wake up and my baby’s gone, and how I’m going to cope when he passes. I can see the change in him now and I know the time is coming soon.

‘But a coffin is unbelievably expensive and all of the other funeral costs. That terrifies me to be honest.

‘And if he passes away tomorrow I wouldn’t want him sitting in a freezer while I scrape together to try and bury him. I just would want him to lay him to rest straight away.’

The Children’s Funeral Fund for England helps pay towards funerals for under-18s, but Donna fears she will still struggle to make her contribution.

Without a large family to reach out to, the 38-year-old is feeling immense pressure as she provides round-the-clock care to her son.

She has gone from paying £42 a month for electricity to nearly £100 and needs to continue to use a lot of energy for Romeo’s feeding pump.

She explained: ‘He throws up quite a lot so the washing machine is constantly going and I need the electricity on all the time as Romeo has a feeding pump that needs to be permanently charged as it is the only way he can get liquid food and fluid into his body when he is unwell.

‘Romeo also needs his TV as often this is his only source of comfort.

‘The cost of travelling to hospital appointments has also risen. We use taxis or Ubers as the risk of infection is too high on public transport but these are now more expensive.’

Romeo was born with total anomalous pulmonary venous return (TAPVR), which sees oxygen-rich blood return to the wrong side of his heart, mixing with blood with lower oxygen levels and affecting how much oxygen can be pumped around his body.

He also has dextrocardia, which means his heart is on the right side of his chest instead of the left.

Donna receives Disability Living Allowance (DLA) for children as she is a full-time carer for Romeo, and therefore unable to work.

The pair are also supported by the The Rainbow Trust charity, which Donna says has been a ‘godsend’.

While the charity supports many of the estimated 86,000 children in England with life-limiting or life-threatening conditions, Donna said she is calling on the government to do more to help struggling families as she said the benefits don’t go a long way.

She says she is is feeling she and Romeo are on ‘borrowed’ time.

Donna added: ‘He loves magazines but they have gone up from £4.50 to £6.99. I have to say to him: “We can get milk, bread and butter or a magazine”. To say no to a child that hasn’t got long left is really, really difficult.

‘He’s never going to finish school or go to college or meet someone and fall in love and go on holidays and have a job and all of that. So that’s why it’s really difficult for me to say no to him.

‘Because of his condition I want to give him everything to make life as easy as possible and to create amazing memories but these are truly worrying times.’

A GoFundMe page has been set up to raise funds for Donna and Romeo. To donate, visit the family’s GoFundMe page.