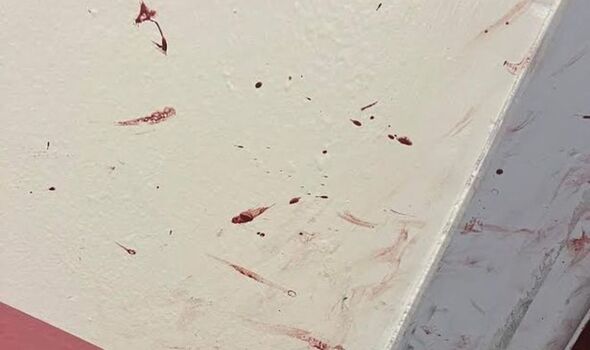 A woman who lives in a tower block plagued by violent incidents and blood-stained walls has been left “terrified” for her young children’s wellbeing.

The mum, who wishes to remain anonymous, says since last autumn there has been a long-running dispute between residents inside the block of flats.

She claims she was assaulted when she asked a resident if they felt remorseful for their behaviour after hearing unsettling noises and abusive language being hurled within the corridors of Chestnut House in Bristol.

On New Year’s Eve, she said the intense uproar heard outside her door had intensified.

She added: “The atmosphere here is horrible and the council doesn’t care. My kids are scared.”

A spokesperson for Bristol City Council said: “We are aware of an incident that took place on December 31 and are supporting the police with their investigation.

“This is a criminal matter and we will continue to work closely with the police in reaching an appropriate resolution.

“Aggressive behaviour will not be tolerated and we will always take action to address it.”

The woman said a “police marker” had been put in place meaning should she experience distress at anything, officers would immediately be deployed.

She said: “It’s not safe here, and no one’s doing anything about it”.

She said the severity of the issues inside the block had impacted her health and she had even had a letter written by her GP to the council about the impact.

From stress to panic attacks, the ordeal has begun to take a toll and she said she is desperate to move out.

She said: “My kids and I share one room because they are terrified to sleep at night.”

Having lived in the building for more than a decade, she said she had “never known anything like this”.

She further claimed the block was unsafe with drugs being used onsite as well as walls covered in what appeared to be blood.

“The police and the council have let down residents who live here. This building is horrible,” she added.

Neighbourhood Inspector Tola Munro: “We’re aware of issues with anti-social behaviour and neighbour disputes at Chestnut House and the neighbourhood team patrols the block every shift.

“Where these issues spill into criminal offending such as damage and assault, officers do investigate but their enquiries are sometimes hampered and the action we can take is limited when on occasions witnesses and individuals who report incidents do not subsequently support a prosecution or provide statements.”

Inspector Munro added that neighbourhood officers have also held residents’ meetings to encourage people to come forward with information about what is happening and who is responsible so that officers can target their patrols and tackle incidents effectively.

Two women die after being pulled from sea off Aberdeen beach