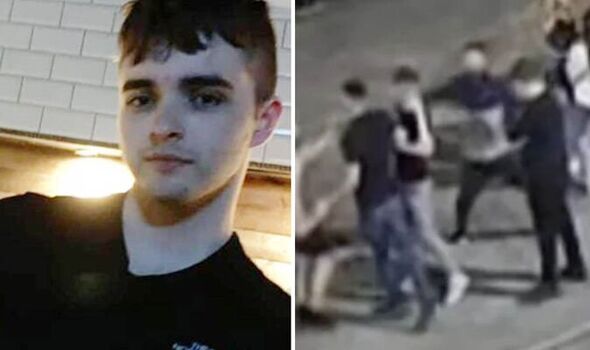 Becky White hopes the tragic footage of the attack on Dean Skillin will make “one-punch” sentences as tough as those for murder convictions. The “forceful, swinging” blow from behind was so hard, Dean, 20, was brain dead before he hit the ground, his killer’s trial heard. Amateur boxer Brandon Sillence, 25, who admitted Dean’s manslaughter, was jailed for 10 years in December, after a jury had cleared him of murder.

The CCTV footage shows Dean trying to defuse an altercation outside The Waverley pub in Bangor, North Wales, in September 2020.

Caernarfon Crown Court heard Sillence hit Dean, of Caernarfon, and his cousin, Taylor Lock, in quick succession after approaching them in the pub. He then left Dean for dead.

A petition by Dean’s family, signed by more than 17,000 people, calls on the Government to drastically increase the sentences.

Becky said: “What sort of coward hits someone from behind and leaves him on the floor, then walks away knowing the damage he had done?

“How is this not an intentional act of violence to cause harm?”

Prosecutor John Philpotts said the killer punch had fractured Dean’s spine and damaged his brain stem. He died the following morning. Sillence, of Bangor, said he had lashed out as a warning to protect a friend.

He told police: “I just literally jabbed. I have gone ‘Boom, boom’.

“I was looking forward to going home to my bird. I did not intend anyone to die.”

But in a victim impact statement, Becky said she felt “anger beyond the anger experienced by other people”.

She said Dean had been “a strapping 6ft 2in young man”, but “was now in a box smaller than a shoe box in the living room”.

Dean’s father, Harry, said: “He truly was the perfect son in every way. He was a lovely lad and an innocent boy.”

Jailing “aggressive, confrontational” Sillence, Judge Geraint Walters, told him: “It was not a warning slap but a forceful punch by a man skilled in punching who knew the kind of damage that you were capable of should you choose to inflict it.”

New crackdown as the Champs-Élysées burns