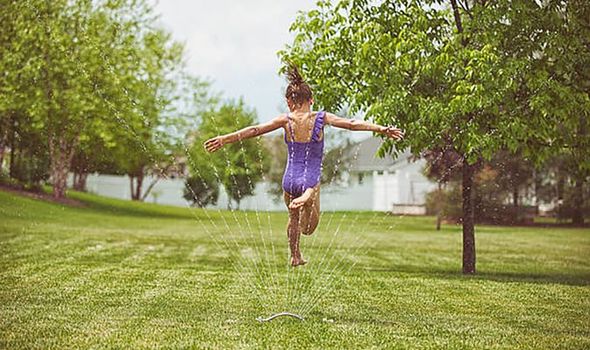 The mum of two took to internet forum Mumsnet to vent at the situation, which arose this week during school half-term. She explained she had taken her own kids out for the day but arrived home to find the little girl playing on the trampoline and swing set.

Mumsnet users said the mum was right to be angry, with some even accusing the neighbour of trespass and breaking into her property.

As Liverpool Echo highlights, the homeowner initially posted: “Would you let kids play in your back garden if you or your children aren’t in? I’ve 2 dc [dear children] 6&7 and out our back garden they have a trampoline and swing set and I don’t mind them bringing friends round just happy the b****y things getting used honestly.

“[They’re] off school this week so I booked a week off work to take them out and do some Halloween stuff. My back gate is quite high up and would need an adult to open it and I always make sure it’s closed at night or when we are out.

“We were out yesterday all day and when we came home as soon as we got in the door, a little girl up the street knocked asking my dd [dear daughter] to come out and play in our garden. My dd was tired and it was p***ing rain so I said not today and the girl asked could she play out the back anyway. I said no and she left. Her mum actually messaged me asking could she go out the back and I said no and that I don’t want the gate left open and my kids don’t want to go out. She read it and didn’t write back.”

The mother continued: “[At 10] today the girl knocked and I said we were getting ready to go out but when we come home if it’s dry and my dc want to they can go out. Came home just now and noticed back gate open so I went out and this girl was out our back. I told her she can’t come out here when we aren’t in and she said her mum said it’s ok and her mum opened the gate. I walked the girl up the street and told her mum I really don’t want kids in the garden when I’m not home and not to open my back gate again. Her mum seriously didn’t see what was wrong and said she was ok with it so why wasn’t I. I just said don’t do it again and walked away.

“I’m going to put a lock on the gate from now on but aibu [am I being unreasonable] here would you let your kid in someone’s garden when they aren’t in or am I being a bit weird. I keep [thinking] what if the child fell or something. My dc [darling child] said they don’t really like playing with this girl as she’s quite bossy to them and always wants in the garden.”

The mum, who didn’t state where in the UK she lives, left a poll so other users could vote if she was being unreasonable.

And, at the time of writing, 99% of users said they felt she was right to feel annoyed.

One parent said: “So the mum broke into your garden! Of course that’s never alright. I would stop her playing there at all for now until the family realise boundaries and that it’s a private garden not a public playground.”

Another said: “Nooooo, nope, no, no, nope, nah, not a chance. Imo [in my opinion] someone’s garden is part of their house. You wouldn’t go in someone’s house if they’re not in so you shouldn’t go into their closed off garden. Now, that said, I have no problem if a ball was kicked over into my front garden and the kid ran in to get it and ran out again. But no way would I be okay with a kid playing in my garden without my permission.”

A third said: “The entitlement of some people is beyond belief. It’s your property, people including children are only allowed on it with your permission.”

And another wrote: “Absolutely not and the girl’s mum is a cheeky mare, and a trespasser. We locked our gate too when the kids were young and had a trampoline, but I found out someone was coming in our garden and using the trampoline when we were on holiday. Either the person looking after our pets let them in or they climbed over the gate. It’s not on – it’s your play equipment and your garden, not a public park.”

A fifth said: “No – of course you don’t let children into your garden when you’re not in, just as you wouldn’t let them into your house. The other mum is cheeky mare.”

In a follow up comment, the mum replied: “Thank god I’m not overreacting I’m putting a lock on now all I kept thinking was what if she fell or something.

“Lock on the gate now. I’m actually shocked at the fact there are others like her. I’d never let my kids just walk into someone’s garden uninvited. I couldn’t get over when she said it’s fine like no it’s not your garden to decide that.”

In the summer, a homeowner was disgusted to find strangers having a picnic in her garden.

She also shared her ire on a lively post on Mumsnet.