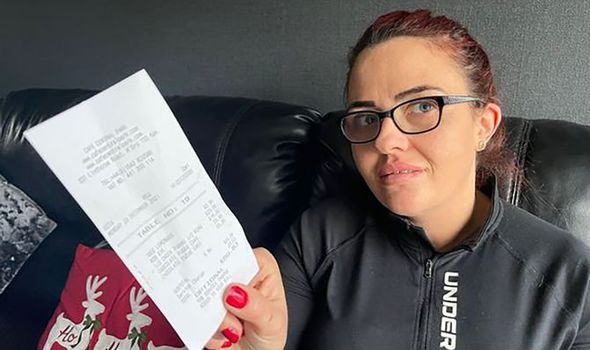 Carlie Fletcher, 35, and partner Colin tucked into a cutlet dish, ribs and a 16oz ribeye steak at Central Park in Middlesbrough, Teesside, on Monday evening. They paid the £60.83 bill but only discovered back at home that this included an “optional” service charge, something Carli said staff should have told them about.

But restaurant bosses insist they offered her a refund and the service charge is highlighted in bold on the receipt.

Management at the plush bar and restaurant, which serves burgers, chicken, steak and other meals, said it is printed clearly on all bills – with the word “optional” printed in bold, capital letters.

But mum-to-three Carli told Teesside Live: “The argument here is that they need to make it clear there’s a service charge in place.

“If they are taking a service charge it should be more noticeable, and it shouldn’t just be taken.”

Carli, from Middlesbrough, said she didn’t intend to tip as staff “were walking around like headless chickens”.

She continued: “It was not worth a tip – so when I saw that, It just thought ‘how dare they’.

“We had no reason whatsoever to leave a tip because the staff were walking around like headless chickens. But the food was spot on, and we could not fault it.

“It makes you feel scruffy if you don’t want to leave that £5.50 – not everyone wants to.”

But service charges, which other restaurants often impose, are used because customers regularly don’t carry cash to tip.

When Carli called the restaurant to talk to the management, she was offered a full refund, which she declined due to concerns over her personal data.

Rishi Sunak told to step up in hospitality crash fears

A director for the venue said: “There are other Teesside restaurants that have been charging a service charge, not just Central Park.

“All the service charges that Central Park receives is shared between 60-65 staff that we employ.

“And it is highlighted, in the bill in bold writing, that it is optional. If people don’t want to pay the charge at reception, we are quite happy to take it off the bill. That’s why it says optional in bold writing.

“And if anybody rings up because they haven’t realised it is on the bill, we will immediately refund it.”