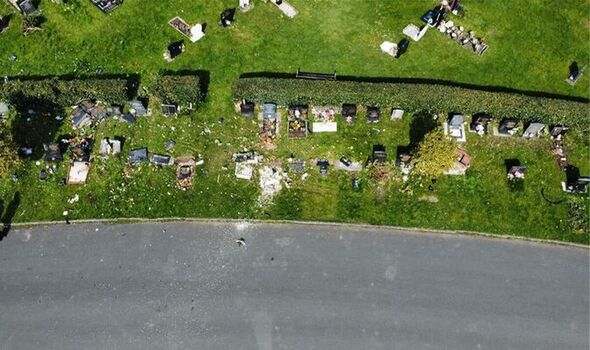 A mother has shared her horror after a drink driver drove into her parents’ and niece’s graves.

According to reports, emergency services were called to Landican Cemetery, in Wirral, shortly before 9pm on Thursday, April 14. It was there that they found a Mini Countryman, on its roof, surrounded by 30 damaged and destroyed gravestones.

The driver, Christine Howard, 57, of Pensby Road, Thingwall, had to be freed from the car before being arrested and taken into custody. She appeared at Sefton Magistrates’ Court on November 1, where she pleaded guilty to driving a motor vehicle while her alcohol level was above the limit, reports the Liverpool Echo.

The court heard Howard had one previous drink driving conviction after failing to provide a specimen of breath for analysis on April 10, 2013. For the incident at Landican Cemetery, Howard was sentenced to a 12-month community order with 30 days rehabilitation activity, fined £140, ordered to pay a victim surcharge of £95 and was disqualified from driving for 60 months.

Three of the headstones destroyed in the incident were Helen Ellis’ mum, dad and niece. The mum-of-three, from Wallasey, told The Echo how she was sat in the hairdressers on Friday, April 15, when she opened her phone and saw the drone image of damaged graves on Facebook.

She said: “I just happened to open my phone and a picture come up of Landican and I just knew it was where my parents and niece were buried. When I first saw the images my heart just sank, I felt sick and it was just heart-wrenching.

“I tried to call but I couldn’t get in touch with anybody at Landican. I went later that afternoon and it was cordoned off, but when we gave our names they let us through the cordon and to the graves.

“Even though I had seen the pictures, seeing it in person was just devastating, I couldn’t stop thinking how and why this could have happened. What should have been a peaceful place to rest had been violated – to be destroyed in the way it was, was just awful.”

Helen said it left the family “grieving all over again”, especially her son who “loved his nan”.

She said: “My mum only died the Christmas before last and we moved in to look after her at the end. When the grave was damaged that really was a big step back for him and for all of us really.

“She [Howard] hurt so many families and left so many people heartbroken. I know for her charge she got the maximum driving ban, but it just doesn’t feel like enough.

“I didn’t feel as though she was remorseful or that she learnt from her last offence. Do I think she will have learnt this time? I don’t think so.”

Helen commended Merseyside Police for their support during the incident and for keeping her family updated.

Meghan Markle and Harry: How are they marking thanksgiving with Archie Harrison?